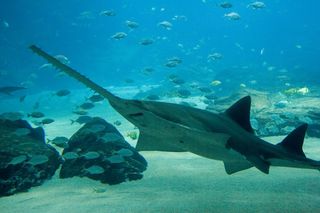 An unidentified sawfish. Observations of a species of freshwater sawfish showed it used its elongated snout to detect prey and swipe at it.
(Image: © Ariel Bravy | shutterstock)

Their long snouts lined with pointy teeth make sawfishes hard to miss. But just how these endangered creatures use their toothy snouts called saws hasn't been well understood.

By observing captured freshwater-dwelling Pristis microdon sawfishes, scientists have found the fish use sensors in their saws to detect other fish, their prey, and to swipe at them with enough force to impale their dinner.

The team, led by Barbara Wueringer of the University of Queensland in Australia, found that the sawfishes tore into the already dead fish they were fed, swiping side-to-side several times per second. The swipes were strong enough to split the fish in half.

The sawfish then used their snouts to pin their meal onto the bottom of the aquarium to eat it.

Scientists already knew that freshwater sawfishes — which hunt in murky waters along coastlines and in rivers — have tiny receptors on their saws that pick up on electrical fields produced by their prey, as well as sensors that detect movements in the water.

In the new research, the scientists used weak electrical fields to simulate prey, and watched as the sawfish responded.

Previously, scientists had observed another species of sawfish, Pristis pectinata, attacking pieces of fish floating in the water, suggesting its use in obtaining food. It has also been suggested that sawfish use their saws to rake through the sand to find buried prey, cut chunks out of whales and slash at schooling fish, according to Wueringer and colleagues.

The new study, detailed in the March 6 issue of the journal Current Biology, suggests their saws make them agile hunters, not just for their sensory features but also for their capability of sawing into prey.

"Sawfish are skilled predators but, ironically, the saw is partly to blame for their global decline: The saw is easily entangled in fishing gear, perhaps as a result of targeting prey caught in the net," they write.

It is hoped that a better understanding of how this sawfish — which is critically endangered according to the International Union for the Conservation of Nature — forages for food can help prevent sawfish from being killed by fishing efforts aimed at other species, they write.