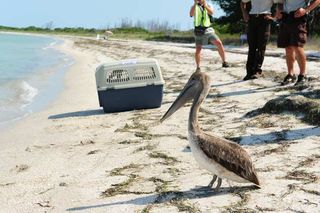 A Brown Pelican prepares to enter the water at the Egmont Key National Wildlife Refuge near St. Petersburg May 23, 2010. The bird was rescued and cleaned by U.S. Fish and Wildlife Service after being found oiled near Louisiana's coast.
(Image: © U.S. Coast Guard photo by Petty Officer 3rd Class Nick Ameen)

The massive oil slick that is spreading throughout the waters of the Gulf of Mexico threatens the existence of a critically endangered sawfish, as well as other already threatened species that dwell there, scientists say.

Louisiana's state bird is among the species that could take a hit from the oil.

"You don't have to be a marine biologist to know that the Gulf oil spill is an environmental disaster of the first order," said Gerald Weissmann, editor-in-chief of the FASEB Journal, published by the Federation of the American Societies for Experimental Biology.

The largetooth sawfish, a popular curio item known for its sawlike snout, was proposed as a federally endangered species on May 7, less than three weeks after massive amounts of oil started gushing into Gulf waters, said George Burgess, an ichthyologist and sawfish expert at the University of Florida in Gainesville.

The fish's already endangered relative, the smalltooth sawfish, is also likely to be impacted by the oil leak, which has been growing for more than a month.

"The oil spill will not only have very dire effects on such highly visible creatures as seabirds and dolphins, but also threatens a multitude of bottom-dwelling organisms including the smalltooth sawfish, which already is in considerable trouble as its range diminished and its numbers dwindled," Burgess said.

While the smalltooth sawfish used to range from New York to Texas, what's left of its population is now confined to the lower peninsula of Florida, Burgess said, with its most important habitat extending from Charlotte Harbor, on the southwestern Gulf coast of Florida, through the Ten Thousand Islands area of the Everglades into Florida Bay and the Keys.

These areas may be exposed to the oil by the effects of the Loop Current, a strong flow of warm water in the Gulf that could funnel some of the oil into the Florida Straits, threatening many species there, including sensitive coral reefs.

"As oil gets caught up in the Loop Current, it will be pulled down into the Gulf Stream, which goes right by Key West on its way up the U.S. East Coast," Burgess said. "The opportunities for serious ecological problems are mind-boggling, with dire implications for what's left of [the sawfish species] in the northwest Atlantic Ocean if the oil reaches critical mangrove habitat."

Many coral reefs in the Gulf and Caribbean are already under stress from warming oceans and diseases. The entrance of oil into their habitat could exacerbate their already tough situation.

"Stuff leaching from the ocean floor is the worst environmental challenge a coral reef can face," Weissmann said.

Oil can particularly affect coral reefs as they are spawning, because the egg and sperm are released by the corals at very precise times, and stay at shallow water depths until settling down to mature — oil can compromise the reproductive success of the corals if it interferes with this cycle, according to the National Oceanic and Atmospheric Administration. Coral reefs in the Gulf of Mexico spawn in late summer or fall.

Scientists and conservationists are also worried about the potential impact of the oil slick on the brown pelican, Louisiana's state bird, which was listed as an endangered species after it was largely wiped out from the use of the pesticide DDT in the 1960s.

The deaths of three sperm whales have also been attributed to the oil spill, threatening the small population of the species that is native to the Gulf, said Celine Godard-Codding, an assistant professor at The Institute of Environmental and Human Health at Texas Tech University in Lubbock. Godard-Codding also warned that already threatened Kemp’s ridley and loggerhead sea turtles could face major population decimation as they breathe in toxic fumes and ingest crude oil.

The largetooth sawfish, which was most common in the northwestern Gulf of Mexico, has not been encountered in decades. The smalltooth sawfish was listed as an endangered species in 2003.

Conservationists had hoped conditions would become favorable for both sawfish species eventually to stage a comeback in Gulf waters, Burgess said. Far more common to South and Central America, the largetooth sawfish migrated up the Central American coast during the summer into the Gulf, the edge of its natural geographic range, he said.

The oil leak could thwart the fish's return.

"If important underwater habitat is destroyed, neither species will have a place to return to," he said. "They can't come back to an underwater desert."

A creature of historic and cultural interest, the sawfish was sometimes depicted as a so-called monster on postcards from the turn of the century, with stories of sawfish catches routinely published in newspapers outside Florida, Burgess said. Today it is not unusual to find the fish's "saw" hanging from the walls of South Florida bars, he said.

The sawfish's fearsome, long, toothy snout is utilized to stun fishes and unearth crustaceans, shellfish and other food buried in the bottom.

It takes longer for sawfish to rebound than other species because of its relatively slow growth rate and its late onset of sexual maturity, Burgess said. He and his colleagues have used their research on the species to develop a recovery plan to help speed its return.

"Our recovery plan covers 100 years, which should give a pretty good indication of how much trouble the animal is in," Burgess said.