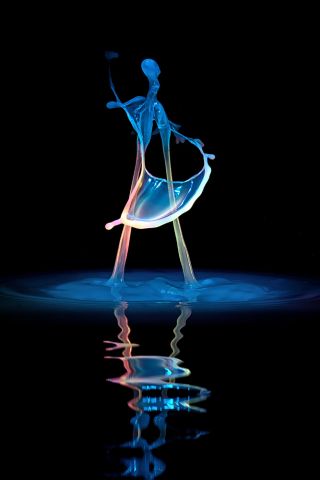 These "double pillar" droplets, as amateur photographer Markus Reugels has dubbed them, requires three water sources, perfectly timed to merge at the moment the shutter snaps.

Reugels, a floor installer in Marktsteinach, Germany, has long experimented with eye-catching water-droplet photography, recently attracting international attention for his "world in a drop of water" shots. In those shots, Reugels placed photos of orbs, from our moon and the Earth to Venus, behind a drop of water. The stunning photos reveal a refraction of the worlds within each droplet.

"Nearly one year ago, I did some [droplet] collisions side-by-side," Reugel said. "I had the problem that the pillars attracted each other."

The merging water columns gave him an idea, inspiring him to create split-second sculptures of two side-by-side droplets and one from above, all merging into beautiful patterns. To create the photographs, Reugels invented a process in which he sets up two side-by-side valves and releases a drip of water from each. A third valve in the middle is timed to hit the two columns just as they "lean" into one another. Colored gels on the camera flash add otherworldly color to the photographs. [Gallery of Double Pillar Droplets]

Reugels plans to up the complexity of his photographs, bringing three and four water droplet pillars to a single point. He's successfully pulled three pillars of water together, but the shapes aren't elegant enough for his liking; LiveScience did get a peek at one, which would likely dazzle even the least artsy of us.

"Maybe in the future I will understand the physics of the processes better to get better and smoother shapes," Reugels said.