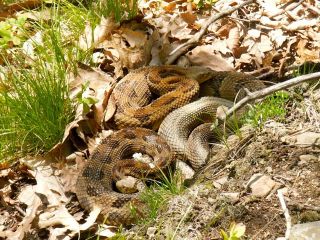 Though often regarded as loners, rattlesnakes may be relatively social, cuddling up with their relatives, a finding that suggests serpents may have more complex social lives than currently appreciated, researchers say.

Timber rattlesnakes (Crotalus horridus) had long been thought to be solitary creatures, though recent studies have suggested their social lives might be more complex. For instance, rattlesnakes in captivity preferentially associate with relatives and use the scents of their kin to guide them on where to forage and dwell.

To learn more about how sociable the snakes might actually be, scientists analyzed the genetic closeness of related clusters of the wild serpents.

Timber rattlesnakes living in the northeastern United States dwell in communal dens in the winter. They emerge in the spring, bask in the sun for several days at rock outcrops, and then migrate to surrounding areas to forage and mate. When pregnant, females do not undergo summer migrations, but instead bask at rookeries before giving birth in the autumn. Females in the rookeries often cluster together in groups of six or more, as do snakes at basking sites on occasion.

The scientists collected tissue samples from 29 pregnant females clustered together at 12 birthing sites and from 419 rattlesnakes in basking areas linked with 18 communal wintering dens in New York and Pennsylvania. They compared how related clustering snakes were with snakes that did not cluster together. [Photos of Pregnant Rattlesnakes]

The researchers discovered juvenile snakes and pregnant females preferred to cluster with kin.

"All of the groups of pregnant females we examined had at least two closely related females that were probably either sisters or mother-daughter pairs," said researcher Rulon Clark, a behavioral ecologist at San Diego State University. "This pattern implies that at least female timber rattlesnakes maintain some sort of bond with relatives beyond their birth period."

"We've known for a while that mothers have an extended post-birth period where they watch over the newborn snakes as the litter basks in the sun to shed their natal skin," Clark said. "We also know from laboratory studies that females separated at birth can recognize relatives when paired up several years later, and associate more closely with relatives than non-relatives. Now we know that the pattern holds for wild populations."

The researchers found that juvenile-juvenile clustering included males and females.

"The interesting thing about the juvenile-juvenile associations is that all of the relatives were the same age, so we assume that they were from the same litter, meaning that individuals born together will continue to associate preferentially with their siblings for several years as they grow up and return to the same denning and basking sites," Clark said.

"I'd love to know if this pattern of sociality is restricted to timber rattlesnakes, or also present in other rattlesnake species, or even in other pit vipers," Clark said. "I expect we'll be able to say a lot more about the social lives of these species in the near future."

The fact that rattlesnakes appear to recognize and group together based on kinship suggests they might have more complex social lives than once known. Snakes may not be especially visual or vocal in how they socialize, but they may instead depend on scents.

"Researchers don't typically think of snakes as being family-oriented animals, as most species seem to be fairly solitary," Clark said. "But here's the thing about snakes — they are so cryptic and secretive that, for many species, we really only have brief glimpses of their lives. With tools like molecular genetics we can look a little closer. In doing so, we are finding some surprises."

Clark hopes to learn more about the long-term relationships between the female rattlesnakes and their relatives.

"Do they associate closely with these same relatives over multiple years, or in other contexts? Are they mother-daughter pairs, or sister-sister pairs?" Clark asked. "Timber rattlesnakes live over 30 years in the wild, so multiple generations can overlap. These types of questions would require careful study of individuals at the same populations over many years. Maybe someday we'll be able to do such a study."

The scientists detail their findings online tomorrow (Feb. 22) in the journal Biology Letters.