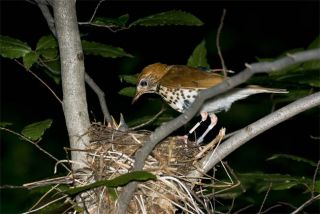 Wood thrushes, like this male shown with its electronic backpack, breed in eastern North America where passersby can hear the songbirds' melodic "Ee-oh-lay."
(Image: © Elizabeth Gow.)

Songbirds fitted with tiny electronic backpacks have provided their downloadable whereabouts over the course of a migration, revealing the feathery aviators can book three times faster than expected.

Bridget Stutchbury, a professor of biology at York University in Toronto, and her colleagues tracked 14 wood thrushes (Hylocichla mustelina) and 20 purple martins, a type of swallow also called Progne subis, from their breeding grounds in Pennsylvania to their wintering grounds in Central and South America.

The next year, in 2008, the team retrieved the devices from five wood thrushes and two purple martins. Overall, the songbirds flew much quicker than expected — more than 311 miles (500 km) a day compared with previous estimates of 93 miles (150 km) per day. And the birds zipped back to North America in the spring about two to six times faster than the fall trip. For instance, one purple martin took 43 days to reach Brazil in the fall, but returned to its breeding colony in the spring in just 13 days.

Stutchbury said the songbirds have more incentive in the spring to chug back to North America where they compete for the best real estate for snagging the highest quality mates.

In fact, the birds took lengthier rest stops during their fall journeys to wintering grounds. The purple martins stopped for three to four weeks in the Yucatan before continuing to Brazil. And four wood thrushes took a one- to two-week break in the southeastern United States in late October before crossing the Gulf of Mexico. Two of the wood thrushes (including one that stopped over in the southeastern United States) stopped on the Yucatan Peninsula for two to four weeks in the fall.

The results, which are detailed in the Feb. 13 issue of the journal Science, were possible due to a new and lighter tracking technology. Before now, satellite tracking devices were so large they could only be used on heftier birds such as albatross and penguins. And the only contraption small enough for songbirds had been radio transmitters, which require a human to follow the tagged bird in an airplane.

Researchers with the British Antarctic Survey miniaturized so-called geolocators recently. The mini backpacks are each smaller than a dime and detect light, allowing researchers to estimate a bird's map coordinates by recording sunrise and sunset times.

"Never before has anyone been able to track songbirds for their entire migratory trip," Stutchbury said.

The resulting migration routes will give conservation scientists a heads-up about what factors might be driving the decline of songbird populations and which regions are important conservation targets. (Songbirds around the world have plummeted in numbers over the last 30 or 40 years, according to Stutchbury.)

For instance, the study results showed that all five wood thrushes wintered in a narrow band in eastern Honduras or Nicaragua, suggesting, Stutchbury said, this region is important for the overall conservation of the species.

"Tracking birds to their wintering areas is also essential for predicting the impact of tropical habitat loss and climate change," Stutchbury said. "Until now, our hands have been tied in many ways, because we didn't know where the birds were going. They would just disappear and then come back in the spring."

The study was funded in part by the National Geographic Society

{{ video="http://www.livescience.com/common/media/video/player.php?videoRef=Cardinal" title="Video - How a Songbird Sings" caption="360-degree view of a northern cardinal's vocal tract while singing." }}