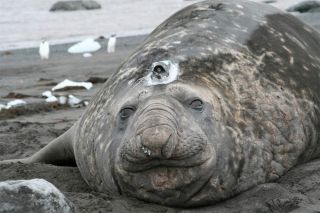 A shedded elephant seal with a sensor on its head. The sensor measures the animal's position, the depth of the dives, the water temperature and its salinity.
(Image: © Joachim Ploetz, Alfred Wegener Institute)

Lumbering elephant seals in Antarctica seem to be taking the heat from global warming, as scientists have found the mammals must dive to deeper than normal depths in warmer seas to snag food. The deeper dives may also mean less time to get food, the researchers say.

The southern elephant seals from Marion Island in the Southern Ocean surrounding Antarctica are some of the most extreme divers, spending 65 percent of their time deeper than about 330 feet (100 meters), with a maximum diving depth of 6,560 feet (2,000 meters). Southern elephant seals are also the largest of the seals, with males reaching up to 22 feet (6.7 m) long and weighing some 11,000 pounds.

Their dive depth, it seems, depends on the prey the elephant seals are searching for. And as their watery world warms, the researchers found, the squid and fish that are usually in waters above 3,280 feet (1,000 m) are forced to deeper waters.

The elephant seals, to get their meals, must follow.

"This prey is moving down to greater depths presumably due to the increasing water temperatures and this is forcing the seals to follow them," researcher Horst Bornemann from the Alfred Wegener Institute for Polar and Marine Research said in a statement.

Bornemann and his colleagues, including seal researchers from the Mammal Research Institute in South Africa, attached fist-size satellite transmitters to the heads of more than 30 elephant seals. The transmitters measured dive depth, water temperature and salt levels in the water every time the seals took a dive. When an elephant seal resurfaced for air, that information was sent via satellite to research institutions involved. [Photos of tagged elephant seals]

The data showed the elephant seals made deeper dives in warmer water so that they ultimately had less time to actually search for food, the researchers said.

"There appears to be substantial variation between individual seals in depths dived to at different temperatures," study researcher Trevor McIntyre of the Mammal Research Institute told LiveScience. Their models suggest that female elephant seals dive between 30 and 33 feet (9 and 10 meters) deeper for every 1.8 degree Fahrenheit (1 degree Celsius) increase in temperature. "However, a number of individual seals displayed much stronger relationships, diving more than 100 meters deeper per 1 degree Celsius increase in water temperature," McIntyre said.

The change in depth may mean the animals find less food. "We therefore assume that the animals will find less prey in warmer water masses," researcher Joachim Plötz of the Alfred Wegener Institute said in a statement.

To figure out if the elephant seals are indeed nabbing less prey, the researchers plan to return to Marian Island in April and attach jaw-movement sensors to the seals.

"So far, we can only derive from the dive profile whether an elephant seal was probably following a fish swarm," Plötz said. "With this new measuring device we [can] learn whether he has actually eaten."

The researchers don't know whether this colony of elephant seals will be able to adapt to the warming of the ocean. They see two options for the colony in the future: The seals can extend their hunting grounds to the colder water masses of the Antarctic or they must dive even deeper. However, the team notes, the Marion elephant seals are already close to reaching their physiological limits in diving depth.