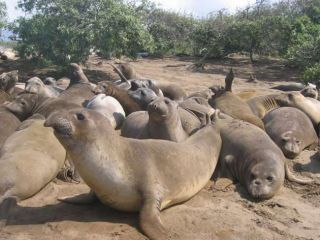 This Behind the Scenes article was provided to LiveScience in partnership with the National Science Foundation. My main research interest is physiology in extreme environments, particularly those with low levels of oxygen.

Animals that thrive in such "hypoxic" environments are ideal species to investigate for how their physiology responds. In addition, studying adaptations to hypoxia in animals at high altitude, during hibernation, or in diving environments may provide insight for understanding and treating human medical issues, such as heart attack and stroke. My recent Ph.D. dissertation focused on the diving physiology of some of the most accomplished diving animals: emperor penguins and elephant seals. Emperor penguins can dive for almost 30 minutes on a single breath, and the record dive of a northern elephant seal is almost two hours! Both species can dive to great depths — greater than 1,500 feet for the emperor penguin — and almost 5,000 feet (nearly a mile!) for the elephant seal. It is well-documented that animals that can dive well have enhanced oxygen-storage capability in their bodies, a feat accomplished by increased blood volumes and higher levels of the proteins that carry oxygen in the blood and muscle (hemoglobin and myoglobin). In the lab of my thesis advisor, Paul Ponganis of the Scripps Institution of Oceanography at UC San Diego, we use various approaches to study how these animals manage their oxygen stores to achieve such extraordinary dives. In the Antarctic, we set up the Penguin Ranch on the sea-ice of McMurdo Sound. During our study, we drilled two dive holes in the ice at our camp site, enabling the emperor penguins to dive freely in the ocean below. In northern California, we study elephant seals while they are diving at sea. We deploy backpack-style recorders on these animals to document their physiological responses while diving. Our work, funded by the National Science Foundation (NSF), has revealed extraordinary physiological responses and adaptations that contribute to the diving ability of these animals. For example, one study revealed that diving emperor penguins have heart rates significantly lower than that of their heart rates at rest. During one emperor penguin’s impressive 18-minute dive, its heart rate decreased to as low as three beats per minute, with a rate of six beats per minute lasting for over five minutes during the dive. As heart rate is a very good indicator of how much oxygen is utilized, decreased heart rates during dives correspond to conservation of oxygen, enabling the animals to dive for a longer time. To provide a direct look at oxygen depletion, we also measured the levels of oxygen in the blood during the dive using an oxygen electrode. This electrode continuously measured the amount of oxygen in the blood, documenting the rate and extent of oxygen depletion during the dive and providing us with knowledge of how these animals manage their oxygen stores. Both emperor penguins and elephant seals can tolerate exceptionally low levels of oxygen in their blood, far below the limits of humans and other animals. This assists them in managing oxygen efficiently and contributes to their ability to dive and obtain food. Combined with their enhanced oxygen stores, other physiological responses like reduced heart rates, and factors such as swimming styles and their hydrodynamic body shape, these animals are well adapted to flourish in underwater environments. Now that I have completed my Ph.D. work with diving animals, I will embark upon studies with another remarkable species: the high-flying bar-headed goose. This bird accomplishes the extraordinary feat of flying directly over the Himalayan mountain range during its semi-annual migration from wintering grounds in India to breeding grounds in Tibet. Although other migratory birds use alternative, lower altitude routes through mountain passes, flocks of these exceptional high-flying geese have been sighted above the summits of Mt. Everest (29,000 feet) and Annapurna I (26,500 feet). Exercise at these altitudes during the migration may be completed in a single, non-stop flight, with no allowance for acclimatization, flying from near sea level in India to altitudes approaching 9,000 meters in less than one day. Oxygen levels at this altitude are only about one fifth that at sea level, yet the bar-headed goose increases its oxygen consumption 10- to 20-fold during flight. Birds are generally more tolerant of high altitude than mammals, but sustained flight at these reduced levels of oxygen is certainly exceptional. The goal of this project is to explore the physiological adaptations in this species, with the overarching purpose of understanding tissue and cellular hypoxia tolerance in an animal that has evolved specifically to maintain performance in hypoxia. With support of an NSF International Research Fellowship, I will initiate this work in the fall of 2009 in collaboration with researchers at the University of British Columbia in Vancouver, Canada. We will investigate oxygen transport from the respiratory system to the tissue during flight in the bar-headed goose, with specific focus on delivery to the heart. The next natural question after documenting what these impressive physiological responses are in any of these species, is of course to ask how they are achieved. We will address the mechanisms of hypoxia tolerance in the heart of the bar-headed goose using a variety of physiological, morphological and intracellular approaches. This work may also provide clues about adaptations in these animals that could benefit humans in the future. For example, tolerance to hypoxia has implications for better methods of harvesting and preserving organs for transplant, and treatment of heart attack and stroke victims. These animals somehow withstand seriously low levels of oxygen in the blood and tissues that are catastrophic to humans. The issue of reperfusion injury — tissue damage caused by oxygen free radicals when blood flow resumes to an organ which has been deprived of blood — is also relevant. This is applicable to a variety of issues in human medicine, though diving animals appear immune to such concerns. A complete understanding of the physiology of these organisms is also essential to interpreting their role within ecosystems. Such knowledge has clear ecological and conservation implications and is particularly relevant in the face of global climate change.