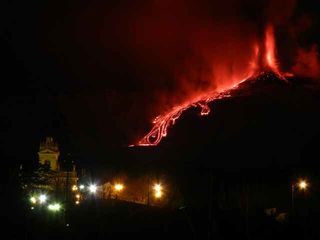 The on-again, off-again eruptions atop Sicily's Mount Etna put on quite an explosive show overnight.

The eruption wasn't as strong as previous bursts, but it hung around for a while.

After more than 12 days of moderate strombolian activity — a kind of mid-level eruption— the New South-East Crater of Mount Etna produced a new paroxysmal eruptive episode (see the video below) in the early morning hours, according to Italy's INGV-Osservatrio Etneo, which monitors the volcano.

"This event was less energetic than the previous ones, but it lasted more than 5 hours," an observatory statement said.

Etna is the largest active volcano in Europe and one of the world's most well-known. It is nearly constantly active and there is rarely a full year that passes without some eruptive activity on Etna. Last year, Etna's violent bursts were spotted from space.

During the early morning eruption, a lava flow poured from Etna's New South-East crater toward a village below. A picture of the lava shows it "seems to reach out for the church of Milo," a village on the eastern flank of the volcano, said the photographer, Boris Behncke, the volcanologist on-duty at the INGV-Osservatorio Etneo this week.

Despite the dramatic photo, the village is safe from danger. The village is out of the range of lava flows produced by summit eruptions such as this one.

"Etna has completely calmed down again, as always after such an episode of lava fountaining, and supposedly it will stay silent for days to weeks, before we will see another episode of this kind," Behncke told OurAmazingPlanet.

The eruption also produced a fire fountain in the crater that fed the display, according to Erik Klemetti on Wired's Eruptions Blog.

"The close relationship between Etna and villages like Milo are always tested during these eruptions of Italy's most active volcano," Klemetti wrote.