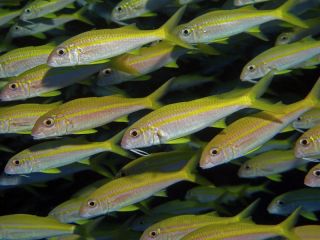 The sea is full of wild and wonderful creatures, but it doesn't hold a candle to the biodiversity on land.
(Image: © James A Dawson, Shutterstock)

Most saltwater fish may have evolved from a freshwater ancestor, according to a new study that traces the family tree of both marine and freshwater fish.

"It's a striking pattern that we haven't really explained yet," said study researcher John Wiens, a professor of ecology and evolution at Stony Brook University in New York.

The new results may provide a clue, Wiens told LiveScience. Freshwater fish could have diversified from saltwater ancestors, only to see those ancestors wiped out in ocean extinctions. Such extinctions would free up space for some freshwater fish to evolve, once again, to thrive in the ocean.

To investigate the relative dearth of fish in the sea, Wiens and his colleagues turned to the largest group of marine vertebrates on Earth, the ray-finned fishes. This group contains 96 percent of fish species, meaning they're "pretty much every fish you've ever eaten or kept in a fish tank or seen in a coral reef, with the exception of sharks and rays," Wiens told LiveScience. [Gallery: Glowing Aquatic Life]

Studying ray-finned fish was a "good place to start," Wiens said, not only because the group is so large but because it allowed for direct comparison between land and sea. Fish aren't land animals, of course, but they do live in a distinct non-marine environment: freshwater.

"Looking at a group in which all these species are aquatic … helps us to isolate what's special specifically about the ocean," Wiens said.

He and his co-authors pulled information on all living fish species from a comprehensive database called FishBase. Next, they combined that information with a family tree of ray-finned fish that shows relationships between groups and clades (groupings of organisms consisting of an individual species and all its descendents). The researchers also put together a tree for known fossil fishes.

The fish family tree also revealed that fish diversity only exploded in the last 100 million years or so. But the strangest finding was what sat at the base of the tree.

"The really weird thing that we found that is most surprising, and may end up being the most controversial, is that all the marine ray-finned fish that we see today appear to be derived from a freshwater ancestor," Wiens said.

This ancestor would have lived about 300 million years ago, Wiens and his colleagues report today (Feb. 7) in the journal Proceedings of the Royal Society B. About 180 million years ago, the first unambiguously marine fish in the lineage start showing up. It’s not until about 110 million years ago that a group of fish called percomorpha, which now includes 40 percent of all species of bony fish, started diversifying in saltwater. In freshwater, another group called ostariophysi evolved into many species, which now comprise almost 70 percent of freshwater fish.

Other fish in the sea

The implication of the findings is that the sea today represents the long-term effects of earlier extinctions, said David Reznick, a biologist at the University of California, Riverside, who was not involved in the study.

"The unexpectedly small number of marine species may reflect past mass extinctions that were more severe in marine than freshwater environments," Reznick told LiveScience, adding that he was reading the paper as a "spectator, rather than as a practitioner" of the type of research Wiens carries out.

The phenomenon of organisms evolving "back" to the sea is not unheard of. Whales, for example, evolved from a terrestrial ancestor that resumed an aquatic life and adapted over many generations to deep-sea living.

Wiens said that the geography of the sea could also contribute to low biodiversity. In freshwater, fish can get isolated by continents rifting apart, rivers changing course or other geographical barriers. Once isolated, individual populations may lose the ability to breed with one another, splitting into separate species.

In the ocean, Wiens said, fish can "wander anywhere," to mate, or at least farther afield than a freshwater fish can usually swim.

Wiens and his colleagues hope to extend the research to find out why percomorpha and ostariophysi suddenly started diversifying like mad 100 million years ago after a long history of fairly low fish diversity. Wiens warned that future fish fossil evidence could alter the fish family tree, and the conclusions about the freshwater fish ancestry could be overturned, though the current evidence supports the fish-from-freshwater theory.

But if the low diversity we see in the seas today is the result of ancient ocean extinctions, it puts today's problems with overfishing and species loss into context, Wiens said. The ocean can certainly bounce back, he said, but humans may not live to see that day.

"If we wipe out and eat all the fish in the ocean and modify the environment in the ocean so that it's inhospitable, what these analyses that we've done show is it may be 100 million years to recover from that," Wiens said.  "And that's a fast recovery."

Correction: This article was updated at 10:15 pm ET to correct two instances of misspelling Wiens' name.