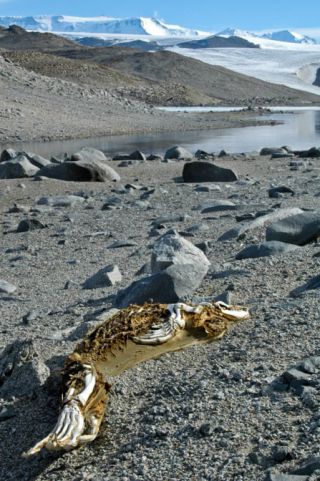 A seal carcass in one of the Dry Valleys of Antarctica in a stage of advanced mummification.
(Image: © Craig Cary.)

Mummified seals now reveal that communities of microbes in Antarctica can change much faster than previously thought, scientists find.

The results suggest that climate change, and the subsequent alterations to the environment, such as temperature changes, would likely lead to drastic microbial changes as well.

The Dry Valleys of Antarctica are the coldest, driest deserts on Earth, which makes surviving there extraordinarily challenging. This has led to the longstanding belief that life there progresses extremely slowly to make the most of the deserts' scarce resources, with changes in ecosystems taking place over millennia.

To directly test this assumption, researchers analyzed microbes living under a carcass of a seal naturally mummified by the Antarctic cold and aridity. These centuries-old mummies have been seen up to 41 miles (66 kilometers) inland in the Dry Valleys and 5,900 feet (1,800 meters) above sea level; why the seals roamed so far away from the coast to their death remains a mystery, with potential culprits including viruses and bad weather. [Image Gallery: Seals of the World]

The scientists compared the microbes living under a mummified crab-eater seal in one of the Dry Valleys with those living in soils exposed to the open air. They also carried the mummy to a site 490 feet (150 m) away and analyzed how the soil underneath it changed over the course of five years.

The mummy leaked nutrients into the soil and trapped moisture under it that normally would have escaped into the air. The researchers found that after just two summers, the bacterial communities under the mummy's new resting place resembled those at the site where it lay for about 250 years.

"We had not anticipated the communities would respond so quickly," researcher Craig Cary, a microbial ecologist at the University of Waikato in New Zealand, told LiveScience. "Up to this [point], people thought it would have taken tens of years, if not hundreds of years, to see a similar response."

The microbial community that sprouted under the mummy's new resting place consisted of microbes native to that soil. However, what were once minor members of that community became major ones, while what were major members became minor. Overall, microbial diversity underneath the mummy slumped dramatically, most likely due to factors such as the added nutrients and extra moisture aiding some bacteria more than others; in addition, the mummy's body would have blocked sunlight, and hindered any photosynthetic microbes.

The researchers have now moved the mummy back to its original spot to see how the microbial communities alter once more. They plan to investigate microbial diversity in the rest of the Dry Valleys — "microbial diversity is very high there, way higher than one might expect from the extreme conditions there," Cary said. "What drives that?"

The scientists detailed their findings online Feb. 7 in the journal Nature Communications.