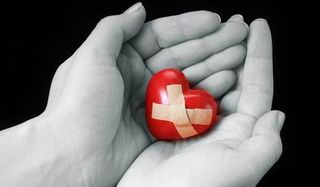 During the 24 hours after the death of a loved one, a person's risk of having a heart attack increases by about 21 times, the study found.
(Image: © Anna Khomulo | Dreamstime)

Grief can be heart-breaking — literally. During the first 24 hours following the death of a loved one, a person's risk of experiencing a heart attack increases by about 21 times, a new study shows.

"Bereavement and grief are associated with increased feelings of depression, anxiety and anger, and those have been shown to be associated with increases in heart rate and blood pressure, and changes in the blood that make it more likely to clot, all of which can lead to a heart attack," study researcher Elizabeth Mostofsky, a post-doctoral fellow in the cardiovascular epidemiological unit at the Beth Israel Deaconess Medical Center (BIDMC) in Boston, said in a statement.

To study the effects of bereavement and grief on the heart, researchers interviewed approximately 2,000 patients who suffered heart attacks, also known as myocardial infarctions, over a 5-year period. Patients answered questions about events that could potentially trigger a heart attack, such as losing someone close to them within the past year.

For those who experienced a heightened risk of myocardial infarctions following the death of someone close to them, sorrow and anguish over the loss may have played a role, according to the study, which was published online Jan. 9 in the journal Circulation.

"Some people would say a ‘broken heart' related to the grief response is what leads to these physiologic changes," said study researcher Dr. Murray Mittleman, director of BIDMC's cardiovascular epidemiological research program. "So, that emotional sense of the broken heart may actually lead to damage leading to a heart attack and a physical broken heart of a sort."

Appropriate psychological interventions are important inhelping to lower the heart attack risk of someone who is grieving, according to the study authors. "We do think it's plausible that social support during that increased time of vulnerability would help mitigate the risk of heart attack," Mostofsky said.

"Physicians, patients and families should to be aware of this risk and make sure that someone experiencing grief is getting their physical and medical needs met," Mittleman said. "And if an individual develops symptoms that we're concerned might reflect the beginnings of heart attack, we really need to take it very seriously and make sure that that patient gets appropriate evaluation and care."

Pass it on: During the first 24 hours following the death of a loved one, a person's risk of experiencing a heart attack increases by about 21 times.