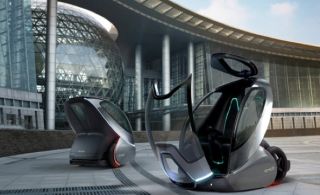 General Motors hopes for all new vehicles to talk to one another; it previously unveiled its EN-V smart car prototype seen here.
(Image: © General Motors)

LAS VEGAS — Automakers and government agencies are teaming up to lay the foundations for a future in which smart vehicles can communicate with one another to improve road safety.

Many new cars today can connect to the Internet, but most of them use their connectivity for "infotainment" purposes, such as navigation or streaming music.

What car companies like General Motors envision for the future is much more ambitious: Not only will cars be able to connect with cloud-based services, they will also be able to talk to other cars; with the smartphone in the driver's pocket; with the toll booth or traffic light up ahead; or with the electric charging station to determine when and how long it needs to be fully juiced up.

In such an auto-connected world, what one car sees or senses could be made immediately available to other cars on the road. The result of all this interconnectivity, automakers say, will be safer roads because drivers will no longer be limited to only what they can see or what their vehicles can sense.

"We want vehicles to have the equivalent of 360-degree situational awareness," Taub added. "We accomplish that today with onboard sensors ... [but] we can see a world where a vehicle-to-vehicle communication” — or V2V — “system can first augment and then replace many of those onboard sensors."

For example, the driver of a car whose vision is partially blocked by a truck would know of an incident up ahead because the truck is broadcasting information from its cameras to other cars on the road.

"This technology is coming," Taub said.

Or you might wonder if the car that is in front of you, and that you're about to enter the blind spot of, is going to change lanes.

If the vehicles can talk to each other, "your car could look at the other car's route ahead of time, and determine that, yes, that car is going to change lanes based on the route that the driver has programmed into their GPS," said Clint Steiner, the senior manager of Automotive OEM at Garmin.

Before a world where networked cars are a reality, there are a lot of hurdles to be overcome first.

For instance, the more data that smart cars receive, the more drivers will be inundated with notifications. If you think distracted driving is a problem now, imagine if your car alerted you to every potential hazard on the road. If not designed the right way, the notifications themselves could become a danger by distracting  drivers.

"We will collect a year's worth of data that will be used to evaluate the safety benefits and guide the development of future policy decisions by the department,"  NHTSA Deputy Administrator Ron Medford said.

"Can you imagine how ineffective it would be if Ford cars only avoided crashes with other Ford cars?" Medford said.

Until every vehicle in the fleet is a smart car — something that experts estimate won't happen for another 20 to 30 years — automakers will also have to develop stop-gap devices in the form of aftermarket transponders and receivers that will enable the current fleet of "dumb" cars to use V2V systems.

GM's Taub believes that once smart cars are in place, they could help ease the transition to the next revolution in driving: cars that can drive themselves.

"If you can make a vehicle that doesn't crash and that has 360-degree situational awareness,” Taub said, “it doesn't take that much more to make one that can drive itself.”