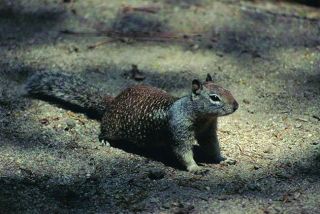 To protect their young against rattlesnakes, California ground squirrels have evolved a special defense—they heat their tails.

Squirrels in the wild wave their bushy tails at snakes in order to look bigger and more threatening. This upsizing defense is a common tactic in the animal kingdom—cats puff up their fur for the same reason when alarmed.

Curiously, squirrels wave their tails at rattlesnakes even more vigorously in the dark, when the snakes' eyes cannot see squirrel tails.

Still, rattlesnakes can sense heat or infrared radiation. Behavioral biologist Aaron Rundus at the University of California, Davis, and his colleagues suspected squirrel tails were sending heat signals to rattlesnakes that were invisible to the human eye.

"There is this hidden communication system going on," Rundus said. "There's a whole world going on out there that we as humans don't detect, hidden processes that other animals with different perceptual capabilities take advantage of that we have still yet to uncover."

The findings are detailed online today in the Proceedings of the National Academy of Sciences.

Rundus and his colleagues also tested rattlesnakes with a stuffed, highly lifelike robotic squirrel model fitted with a heatable tail.

The rattlesnakes were wary of the waving "squirrel-bot" tail, but especially so when it was heated to the same temperature as the tail of a live squirrel confronting a rattlesnake.

In the future, the researchers would like to improve their squirrel-bots enough to take them out into the field and test them in more natural settings, as well as build in other squirrel behaviors, such as sand or gravel tossing.