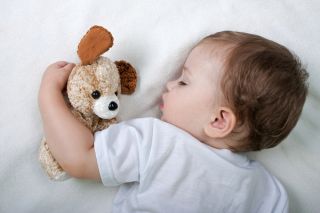 Infants who have trouble falling and staying asleep might be at risk for persistent sleep problems throughout their early childhood, a new study suggests.

Researchers asked 359 mothers to fill out a questionnaire to learn whether their infants and toddlers had trouble sleeping.

They found that 10 percent of children were reported to have a sleep problem at some point during early childhood, and that the problems that developed in young infants tended to persist through toddlerhood.

"Research shows that if you deprive a child of sleep, it could have an impact on their daily functioning," said Dr. Hari Bandla, a pediatric sleep specialist at the University of Chicago Medical Center, who was not involved with the study.

"If they don't get enough sleep based on their age, it can change how they function day-to-day," Bandla said. "Lack of sleep or poor sleep can negatively affect their learning, a crucial part of their development."

The study is published online today (Jan. 4) in the journal Pediatrics.

Sleep is crucial for a child's development

The new study is the first to investigate the prevalence of sleep problems in infants and toddlers under age 3. About 70 percent of children 10 years or younger experience some type of sleep problem, according to the National Sleep Foundation's 2004 Sleep in America poll, which was based on about 1,500 children.

Sleep problems can include having nightmares, insomnia, restless legs syndrome, night terrors and sleep apnea, which is a sleep disorder that may cause someone to  briefly stop breathing while sleeping. These problems could result in poor sleep that makes you tired during the day.

Studies have shown that if left untreated, sleep apnea is associated with an increased risk of high blood pressure, heart disease, obesity and diabetes.

In the new study, mothers filled out questionnaires when children were 6 months, 1 year, 2 years and 3 years old.

Researchers also found that moms who reported that their child snored didn't perceive it to be a problem. The survey showed that 12 to 20 percent of children snored many nights during week.

"Snoring is something parents should pay more attention to," Bandla said. "It's considered a normal part of sleep, but parents should be aware that snoring is an important symptom for sleep apnea. If their child is snoring, they should talk with their doctor about it."

What parents can do

"If it takes longer than 15 to 20 minutes for a child to go to sleep, there might be a problem," Byars said.

He noted that while it's completely normal for children to wake up two to four times during the night,  a child who can't go back to sleep may have a problem.

"You end up having a child and parent not getting enough sleep, which disrupts their mood, and has an impact on their daytime functioning," Byars said.

One way for parents to address a child’s difficulty falling asleep is to develop a consistent bedtime schedule, Byars suggested.

He recommended putting the child to bed when they are drowsy, but awake. If the child can’t fall asleep, he suggests checking on them periodically, reassuring them briefly, but avoid taking them out of their crib or bedroom.

Pass it on: Sleep problems in kids may start infancy and persist through toddlerhood.