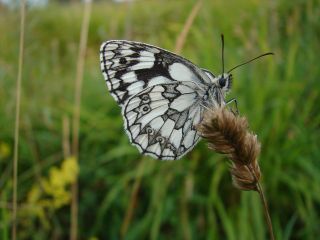 Animals are leaving ranges made inhospitable by climate change and moving into new territory. In some cases, people are helping out. British researchers have relocated butterflies including this species, the marbled white, north of their native range.
(Image: © copyright Adam Hincks, geograph.org.uk)

As climate change progresses, the planet may lose more plant and animal species than predicted, a new modeling study suggests.

This is because current predictions overlook two important factors: the differences in how quickly species relocate and competition among species, according to the researchers, led by Mark Urban, an ecologist at the University of Connecticut.

Already evidence suggests that species have begun to migrate out of ranges made inhospitable by climate change and into newly hospitable territory.

"We have really sophisticated meteorological models for predicting climate change," Urban said in a statement. "But in real life, animals move around, they compete, they parasitize each other and they eat each other. The majority of our predictions don't include these important interactions."

These are important because some species may not be able to move fast enough to survive, or they may have to compete with new species or species better able to adapt to the shifts during and after the move.

To test how competition and variation in dispersal ability would affect species' success at shifting to new habitats when faced with climate change, Urban and his colleagues created a mathematical model.

The researchers found that diversity decreased when they took these factors into account, and that new communities of organisms, which do not exist today, emerged.

Not surprisingly, the results favored organisms that could tolerate a wider range of habitats and were well equipped to move when necessary. Meanwhile, species with small ranges, specific needs and difficulty dispersing lost out.

Overall, competition slowed everyone down in the pursuit of habitat; however, the strongest dispersers were able to overcome this and displace others, the researchers found.

"The species that face the greatest extinction risks might not be limited to those that disperse less than climate change absolutely requires, but also those that disperse poorly relative to their warm-adapted competitors," they write in a study published in the Jan. 4 online edition of the journal Proceedings of the Royal Society B.