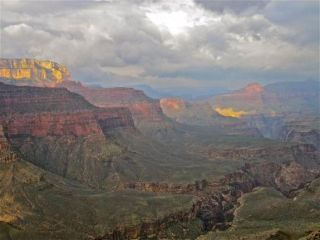 In the Grand Canyon National Park, springs have warmed up over the past 30 years and visitor attendance has been peaking earlier.
(Image: © Andrea El-Wailly)

As climate changes, animals' seasonal habits shift: Flowers bloom earlier in spring, birds change the timing of their migrations, hibernating mammals emerge earlier. Now, researchers have found what they say is evidence of a similar shift in humans.

They found that peak attendance in U.S. National Parks in which spring is getting warmer has shifted more than four days earlier since 1979.

"While the occurrence of global warming continues to be debated by the public, our analysis suggests that we are already responding to climate change," the researchers, Lauren Buckley and Madison Foushee of the University of North Carolina at Chapel Hill, wrote in a study published online Nov. 23 in the International Journal of Biometeorology.

They used attendance data from 27 of 55 national parks from 1979 to 2008, excluding those parks that did not experience strong seasonal shifts in park attendance, those who started out in 1979 with relatively few visitors, and those with seasonal visitor patterns determined by limits placed by the park service, such as cave tour reservations.

They compared this with temperature data for the same years from April through May, since the earlier arrival of spring warming is typical of climate change and predicts shifts in many organisms' seasonal clocks.

Nine of the parks experienced significant increases in mean spring temperatures, and seven also exhibited shifts in the time of peak attendance. Among these seven parks, peak attendance shifted an average of 4.6 days earlier over the 30 years.

Meanwhile, of the 18 parks without significant temperature changes, only three had attendance shifts.

Buckley and Foushee caution that their analysis does not show that climate change caused the shift in attendance; it simply shows there is a relationship between the two phenomena. However, this finding fits well with other evidence of seasonal shifts among organisms.