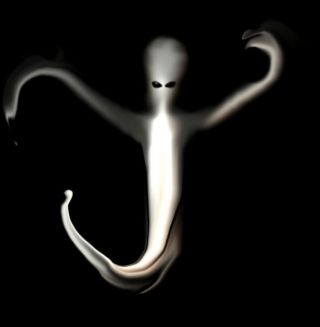 Tens of thousands of people gathered on Saturday (Dec. 10) in Moscow's Bolotnaya Square to protest against the regime of Vladimir Putin and his party. But amid the pro-democracy chants and police presence, there was a mysterious visitor: An unidentified craft was spotted hovering high above the event. It was strangely silent, and clearly not a helicopter. The UFO was caught on video, and had some protesters wondering if they were being watched by aliens. According to a report in Britain's the Daily Telegraph, "Witnesses are at a loss to explain the object seen by thousands."

Spacecraft or aircraft? The UFO is unlike most suspected extraterrestrial spacecraft (such as typical "flying saucers") in that it seems to be held aloft by four (or perhaps six) small propellers. Such propellers would be useless to travel through space, as there is no air for the propellers to push against.

Instead, many suspected the UFO of being an unmanned camera drone of the type routinely used by police and journalists — both of whom presumably have more of an interest in the political protests than space aliens.

The profile of the UFO, as seen in blurry video footage, exactly matches camera drones: A dark body in two main segments roughly resembling a figure 8. The upper half is the engine and control (with, as one witness described, "five extended tendrils or pylons emanating from the body of the vehicle"), while the lower half is a hanging camera. It has a blinking red light on one side and a blinking white light on the other side — again, a feature that is typical of known aircraft, and atypical of UFO reports. [7 Things That Look Like Real UFOs]

Police around the world have used similar radio-controlled "eyes in the skies" for years; British police frequently use a small, battery-powered "Microdrone" for surveillance, for example. In the end, this "Moscow UFO" was identified as a drone camera launched by the Russian Ridus news agency, which has not only covered earlier protests against Putin but released photos taken by their high-flying drone camera at that same event. Unless extraterrestrials are moonlighting as freelance photographers, it seems this case is closed.

It's not clear whether the Russian protesters really believed they were being visited by aliens or the video footage was too good not to hype into a UFO report. Either way this case is a good reminder that the "U" in UFO stands for "unidentified" — and it only takes one person to be unable to identify something in the sky to spawn a UFO story.