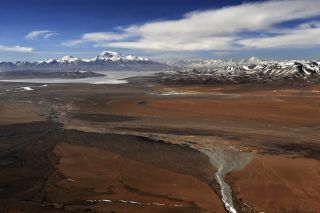 Naimona'nyi is the highest peak of the Nalakankar Himal in Tibet, but the ice is retreating on this stunning mountain.
(Image: © mastiffliu, Shutterstock)

SAN FRANCISCO — A half-century record of history has melted away from the Naimona'nyi glacier in southwestern Tibet, highlighting the changes coming to glaciers across the Himalayas.

Ice cores from glaciers capture a detailed history of the atmosphere and climate from the time when the snow and ice fell. They record dust, ash and even minute amounts of nuclear fallout from atmospheric nuclear tests conducted in the 1950s. It can all be seen in ice around the globe, from the Himalayas to the poles to the Alps.

But at Naimona'nyi, that evidence has all but disappeared.

"At least the top 50 years of this record has been obliterated," Mary Davis, an ice-core researcher at Ohio State University, reported here at the annual meeting of the American Geophysical Union (AGU). "We surmise that perhaps it is gone because of melting."

By drilling tubular cores out of glaciers and ice caps around the world, glaciologists can track climate history and even pinpoint specific human events such as the 1950s and 1960s nuclear bomb tests in the South Pacific. [History's Greatest Explosions]

At Naimona'nyi glacier, that recent historical record has vanished, Davis said. Meanwhile, she said, the glacier is showing ominous signs of melt, including standing water in ponds on top of the glacier and small cylindrical melt-holes, called "cryoconites," in the ice.

"The glacier is losing mass from the top through melting, but it's also retreating," Davis said. "This retreat is accelerating."

Glacial retreat, which occurs as the ice melts along its edges and so "moves" landward, could cause water shortages among the people who depend on these rivers of ice as local sources of drinking water, Davis said. Retreating glaciers can also leave behind large glacial lakes, according to Quincey. These lakes are at risk of bursting from their earthen-dam walls, causing devastating flash floods in valleys below.