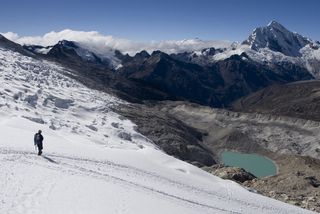 The glaciers studied are located in the Cordillera Blanca, or White Mountains, in western Peru, where they act as frozen water reservoirs that store up snow and ice in the wet season and release meltwater in the dry spring and summer.
(Image: © Jakub Cejpek | Shutterstock)

SAN FRANCISCO — As glaciers retreat, they send out more and more water during the warm melt season — until the giant ice masses become too small to maintain that level of discharge. Now, new research suggests that the glaciers of the Peruvian Rio Santa Valley have reached that point.

That means the towns and villages in the valley have moved past the point of "peak water," and there will be less and less water flowing down from high glaciers in the dry season. It's unwelcome news, given that about 80 percent of the water coming down from mountain glaciers in the Rio Santa already gets drawn off for irrigation, study scientist Michael Baraer, a doctoral candidate at McGill University in Canada, reported here Wednesday (Dec. 7) at the annual meeting of the American Geophysical Union.

"For almost all the watershed we studied here, we have good evidence that we have past peak water," Baraer said.

The glaciers are located in the Cordillera Blanca, or White Mountains, in western Peru. There, they act as frozen water reservoirs, storing up snow and ice in the wet season and releasing meltwater gradually in the dry spring and summer. As the glaciers recede due to climate change, spring and summer melts release more and more water, at least until the glaciers lose so much mass that even if they retreat faster, the amount of water they discharge is lessened.

Baraer and his colleagues examined satellite views of the Cordillera Blanca glaciers and levels of water discharge, as well as how much the flow varied over time.

They found that peak discharge from the glacier is over, Baraer said. That means that less water will reach the Rio Santa Valley during the June to November dry season, when rain is minimal and communities rely on meltwater to supply towns and agricultural fields. If the glaciers disappear completely, Baraer said, water discharge from the mountains during the Rio Santa dry season may shrink by another 30 percent of the current level.

Dams could save up wet season precipitation in reservoirs for the dry season, Baraer said, but liquid reservoirs evaporate faster than solid ice glaciers, meaning that the lakes wouldn't be able to provide as much water as the glaciers have traditionally stored.

"Dams, of course, can be seen as a solution for some very particular projects, but we have to know that these dams will never ever replace the hydrological systems that are in place today," he said. Other South American regions in Bolivia, Chile and Ecuador may soon face similar challenges, he said.

Peruvian officials expected this day to come, Baraer added, but many expected to have decades to plan for the end of peak water.

"What it means now for the population is that instead of having 10, 20, 30 years' perspective to find some solution for water use and allocation, in fact, these years do not exist," Baraer said.