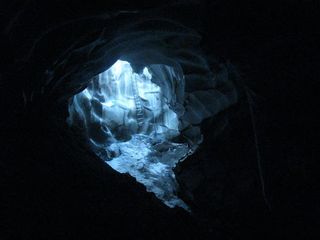 The entrance to Warren Cave, on Antarctica's Moun. Erebus, requires a 50- to 60-foot rappel. Climbing out is sometimes eased by a rope ladder.
(Image: © Brian Hasebe)

SAN FRANCISCO — Biologists are using volcanic ice caves at the bottom of the world as windows into the mysterious biosphere found deep beneath Earth's crust.

The caves are found on the summit plateau of Antarctica's Mount Erebus, a dormant volcano that rises 12,448 feet (3,794 meters) into the frigid antipodean air. The caves harbor microbes that are isolated from their surface brethren, and they make a living in entirely different ways.

With virtually no organic matter to munch on, many of the cave dwellers "eat" rock. They draw sustenance from metals such as iron and manganese, as any microbes found far below Earth's surface must do.

"Caves are a great thing, and mining shafts are a great thing, because they give you access to the deep crust," Hubert Staudigel, of the Scripps Institution of Oceanography at the University of California, San Diego, said during a presentation here Thursday (Dec. 8) at the winter meeting of the American Geophysical Union. [Extremophiles: 8 Bizarre Creatures]

Staudigel discussed his team's efforts to sample the biota of the ice caves, which are known as Warren Cave and Warren West. The researchers also investigated a small cave beneath an ice tower called Harry's Dream.

Erebus' ice caves form when fumaroles — cracks in the Earth's crust that vent hot gas — melt someof the overlying snow to form caves. Ice towers take shape when these fumaroles spew steam into open air, which is so cold that it freezes the steam in place, creating a stack.

Because of the volcanic heat, the researchers' three study sites are warmer than the surrounding Antarctic landscape. Warren, Warren West and Harry's Dream measure 64, 36 and 52 degrees Fahrenheit (18, 2 and 11 degrees Celsius), respectively, researchers said.

While freezing to death in the caves is not much of a worry, the sites do present considerable challenges to researchers. Their treks to the caves mean a steep climb up the rugged, remote Mount Erebus, for one thing. And getting down into the caves can be a chore.

"It's like a 50 to 60 foot rappel into this hole," Staudigel said of Warren Cave. "It's a very complicated network of tunnels. Warren, like a rabbit's warren — that's why it's called that."

The researchers are identifying and culturing the microbes they find in the ice caves, attempting to understand just how this unique ecosystem works. So far, they've found a wealth of interesting microbes.

"We found novel communities of eukaryotes and prokaryotes," Staudigel said, referring to single-celled organisms with and without nuclei, respectively.

The work on Erebus is part of a larger campaign to learn more about the sprawling and mysterious biosphere lurking unseen — and relatively unstudied — far underground. The ice caves could help shine a light on these subterranean microbes, researchers said.

"We feel that these ice caves deserve a role in the spectrum of sites that we study for deep, dark environments," Staudigel said.