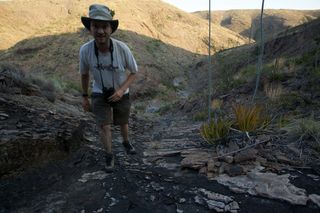 The sexy zip of a male hummingbird as it dives is made not by its voice, but with its special tail feathers during its courtship dance. Christopher Clark, now a postdoctoral researcher at the Peabody Museum of Natural History at Yale University, discovered these unique tail sounds.

After getting his undergraduate degree at Washington State University in 2001, he attended graduate school at the University of Texas in Austin and then the University of California, Berkeley. His graduate work focused on the roles of sexual selection and flight performance in shaping hummingbird tail morphology.

The most acclaimed part of his dissertation was his 2008 paper "The Anna's hummingbird chirps with its tail" which made headlines and launched the current phase of his scientific career. In that paper, he demonstrated that the Anna's Hummingbird (Calypte anna) makes loud sounds with its tail-feathers during its courtship display, rather than vocally, as was previously believed. Watch this video to learn more.

After completing his Ph.D. in 2009, Clark and his present advisor at the Peabody Museum, Richard Prum, were awarded a National Science Foundation grant to delve into the physics of the sounds that feathers make. In the past two years, Clark has traveled extensively in Latin America to record the courtship displays of sheartails, woodstars, and other poorly studied hummingbird species — nearly all of which produce distinctive sounds with tail-feathers. In the lab, Clark uses a wind tunnel to get feathers to reproduce the sounds the birds make in flight. The wind tunnel allows him to study how feathers produce sounds over a range of air speeds.

At age 22, I was sitting at a diner in Idaho, watching calliope Hummingbirds visit a feeder that was inches from my face. I thought to myself, "hummingbirds are really cool! And they'd be easy to catch, which would make them easy to study!" If you decide to study a particular animal, then you have to make sure that your research question fits the animal well. Hummingbirds have unparalleled flight abilities and they're not afraid to show off, so studying their flight was the best fit.

The current project arose when I figured out that hummingbirds were making loud sounds with their tail-feathers during courtship displays. This isn't the "humming" sound that they're famous for, but rather, these were sounds that many people thought were vocal. It turns out that by putting the feathers in a wind tunnel, these non-vocal sounds were really easy to reproduce and study. So that's how I find myself studying the sounds birds make when they fly.

What is the best piece of advice you ever received? "Good judgment comes from experience. And most of that comes from bad judgment."

One lesson here is that you have to let yourself make mistakes in order to learn. If you don't try an experiment because you're afraid it won't work, then you're not going to do your best science. Make mistakes, and learn from them. I spent my entire first field season failing to get Anna's hummingbirds to perform displays. Once I finally figured out a series of tricks (patience and a willingness to sit on the ground for hours being the most important), it was so exciting to finally get some data! It's important to recognize when you've used bad judgment — and to fix it.

What was your first scientific experiment as a child? I didn't experiment — I observed. When I was in cub scouts (age 11), I made a birdhouse that we hung outside the window by my bed. A pair of black-capped chickadees nested in it for the next couple of years. They would land on the wire about two feet from the window, before and after going to the box. They couldn't see through the window, but I could see and hear them really well (and hear the babies) when I lay in bed, so I watched them for hours. I figured out which one was female — she would shiver her wings and the male would feed her. Later when they had babies, they would bring green caterpillars from the Douglas firs nearby. I counted the feedings for a few hours; they fed their babies about every four minutes, for the wholeday.

What is your favorite thing about being a researcher? I have two favorite things. One is when I do an experiment that has clear results, and not at all what I had expected. Male Anna's hummingbirds make this loud CHIRP when they perform a courtship dive to a female. It sounds like a vocalization, like a bird sitting there going, "chirp, chirp," except he's diving at high speed when he does it. So I wanted to test whether the tail makes this sound, by finding a male who could make the sound, then catching him and removing his outer tail feathers and getting him to dive again. I fully expected the null result, i.e. that the bird would still make the loud CHIRP when missing two tiny feathers. I had told people that the sound was vocal, and I was testing just to make sure. He rose up, up, up, then dove... and whiff, he didn't make the sound! 10 times in a row he failed! I was astonished. I spent the rest of the day with my head in a cloud, thinking about what this meant. I was already thinking about all of the other species I had to study — but of course, it also meant that I had to repeat the experiment a few more times, in order to convince other scientists that my result was real.

My other favorite thing is going to look for a poorly known hummingbird in a remote place, and seeing its courtship display for the first time. A famous ornithologist, James Van Remsen, once offhandedly mentioned, "Only a fool would study the woodstars," because of how hard they are to find. I have to do my homework for these trips, and it takes some mighty sleuthing; I read ornithological books for hints (such as what time of year they might breed), and I talk to other ornithologists and birders for clues. Sometimes finding the displays works through sheer luck. I've been really successful at it — I have some truly amazing displays that I've seen, and I will eventually get them up on YouTube. It turns out feathers make a fantastic array of sounds!

What is the most important characteristic a researcher must demonstrate in order to be an effective researcher? Stubbornness, hands down. Science is really hard sometimes, and you have to stick with it. Grad school is hard. Designing a good experiment is hard. Getting collecting permits is hard. Getting funding is hard. Finding your animal is hard. Catching your animal is hard. Running an experiment is hard. Repeating your experiment for what feels like the thousandth time is hard. Dealing with stubborn collaborators is hard. Analyzing your data is hard. Having a paper rejected is hard. There are so many things that can trip up your research, and stubbornness will help you past those obstacles better than any other attribute. It's a myth that only "smart" people can do research. Actually, anyone can do research, but you have to be persistent to succeed.

Ben Franklin was at a demonstration of a new invention, the hot-air balloon. Someone nearby asked: "It's nice, but what's it good for?"

Ben's legendary reply: "What good is a newborn baby?"

Of course, today, hot-air balloons have grown up, and have many uses that were unanticipated in 1783. Almost all current scientific research is the same: we don't know exactly what it's good for. For my research I can come up with some plausible answers: maybe we'll invent a new type of useful noise-maker that flutters like a feather (feather whistles, anyone?). But honestly, these are pretty uncertain. I don't really know what good this baby is. I think the biggest immediate benefit of my research is to increase the public's awe at how fantastic the natural world is, and how much basic, everyday stuff is still unknown! You have to get people to appreciate nature before you can convince them that it should be preserved.

Who has had the most influence on your thinking as a researcher? This is tough, there are so many! A beloved fraction of what I do is 'natural history,' which is the observation of how organisms live their lives in their natural environments. Anytime I'm outside I make observations, even if it's tangential to my main research purpose. Alexander Skutch was a terrific natural historian, and so much of what we know about tropical birds stems from what he observed. Skutch became an ornithological legend through purely observational study, and in his writing he was especially good at making clear the difference between his observations (i.e., data) and his interpretation of his observations (which is theory). I think modern biology sometimes over-emphasizes the role of hypotheses and theory — I'd never put in an NSF proposal that I wanted to study hummingbird natural history, because it's not fundable. But it's important to remember that science begins with careful observation; the hypotheses come later. So when I'm writing about hummingbirds, I try to emulate Skutch and make the difference between my data, and my interpretation, clear.

What about your field or being a researcher do you think would surprise people the most? People are often surprised to learn that these hummingbird courtship displays have not already been studied. It was first proposed in 1897 that hummingbirds make these sounds with their tail-feathers. It hung there like a low-hanging fruit on a tree, until I picked it in 2008! Even really common species, like the Ruby-throated Hummingbird, mostly have a poorly known natural history. So it's actually easy to make new discoveries about them, using nothing more than a notebook, binoculars, a camera and patience. While I love going to remote places like the Atacama Desert or Big Bend National Park to discover the birds there, I did the original experiments on the Anna's hummingbird by riding my bicycle to an old landfill near my house. Anyone who puts their mind to it can discover new things about the animals and plants living right in their back yard. That astonishes people!

If you could only rescue one thing from your burning office or lab, what would it be? My box of hummingbird feathers. I have obtained them over the past eight years of research in a couple dozen field sites in several countries. The collecting permits are hard to get, as are the CITES export permits. The birds are hard to catch. For insurance purposes I would probably claim a value well over $100,000, which mostly would reflect the time it would take to re-acquire a similar set feathers. The truth is, they're literally priceless, since it's illegal to buy or sell them.

What music do you play most often in your lab or car? I love the band Cake. My favorite song of theirs is "Federal Funding."

Editor's Note:The researchers depicted in ScienceLives articles have been supported by the National Science Foundation, the federal agency charged with funding basic research and education across all fields of science and engineering. Any opinions, findings, and conclusions or recommendations expressed in this material are those of the author and do not necessarily reflect the views of the National Science Foundation. See the ScienceLives archive.