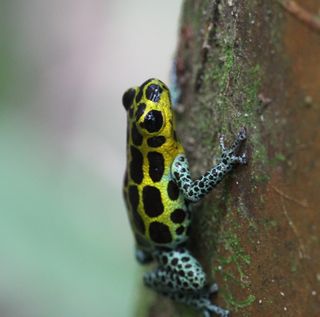 These poison dart frogs evolved their colors hyper-locally, with warning signals that stave off only predators in their neighborhoods.
(Image: © Mathieu Chouteau, Université de Montréal)

The colorful markings of poison dart frogs vary depending on where the frogs live. Now, a new study using thousands of fake-frog decoys finds that these markings evolved hyper-locally, explaining why individuals in a single species of frog can sport so many different colors and patterns.

This local evolution means that yellow stripes would do little to save a poison dart frog from hungry birds in a spot where squiggly green marks signal danger. Predators are more likely to attack strange frogs, not realizing they're toxic. That gives local frogs a hometown advantage.

"When predators see that their targets are of a different species, they attack," study researcher Bernard Angers, a biologist at the University of Montreal, said in a statement. "Over the long term, that explains how patterns and colors become uniform in an area."

In the animal kingdom, bright colors are often a sign for predators to steer clear. Toxic moths and butterflies don yellow-green wings; cyanide-oozing millipedes glow with a sickly bioluminescence.

The poison dart frog Ranitomeya imitator sports bright colors on its back. Depending on where a frog is found, these colors vary. In the new research, Angers and his graduate student Mathieu Chouteau focused on two R. imitator populations in northern Peru. In the highlands of the Cainarachi Valley there, the frogs are splashed with a green undulating pattern, almost like an abstract snakeskin pattern. In the lowlands only 6 miles (10 kilometers) away, the same species of frog boasts yellow stripes instead.

To test the efficacy of these warnings against predators, Chouteau travelled to Peru with no less than 3,600 life-sized plasticine models of frogs, painted with green patterns, yellow stripes, or simply left brown.

"The trickiest part was transporting my models without arousing suspicion at the airport and customs controls," Chouteau said in a statement.

Fortunately, Chouteau and his thousands of 0.7-inch-long (18 millimeter) fake frogs made it to Peru. There, he placed 300 yellow-striped frogs, 300 green-patterned frogs and 300 plain brown frogs in two locations, one a highlands site where green frogs were local, and one a lowlands site where yellow frogs roam. Chouteau secured the decoy frogs to leaves with toothpicks. Then, he came back every day for three days to see how the fake frogs were faring. [Gallery: Real & Fake Frogs]

Upon return, Chouteau discovered that his decoy frogs had done the trick. At both sites combined, 129 of the models had come under attack and were marred by beak marks, snakebites or lost limbs. Some were torn in half. (Another 200 or so were chomped on by roaches and ants, and these were left out of the analysis.)

At both sites, Chouteau found, the frogs painted to look like locals got only a quarter of the attacks as the frogs painted to look exotic. At site one, where green was the local color, 26.6 percent of the yellow-striped frogs got attacked, compared with only 7.2 percent of green-patterned frogs. At site two, where yellow was normal, exotic green frogs fell under attack 18.9 percent of the time, compared with 8.2 percent for yellow-striped frogs.

The results explain why differently patterned frogs rarely show up in the same areas, the researchers report in December in the journal The American Naturalist. Predators get accustomed to avoiding a certain pattern, say, yellow stripes. But when a green frog shows up, they don't associate those colors with danger, so they pounce. That means more yellow-striped frogs will grow up and reproduce in those areas, while green frogs are better off in places where the predators have learned to avoid them.

Choteau said he was surprised at the tiny scale of these evolutionary differences, with differently patterned frogs ruling the roost just a few miles from each other. He was also surprised, he said, by how quickly predators learned that his clay models made a poor meal. Most of the difference in attacks between local and exotic frogs happened in the first day, the researchers found. By day three, predators were largely snubbing all three versions of fake frog.

"A second surprise was the learning abilities of the predator community," Chouteau said, "especially the speed at which the learning process takes place when a new and exotic defense signal is introduced at a massive scale."