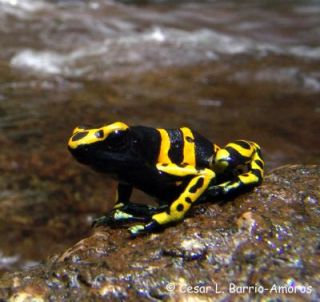 The most toxic, worst-tasting poisonous frogs are also the most physically fit, a new study finds.

Poison dart frogs, which are native to the rain forests of the Amazon, secrete a bitter toxin from their brilliantly patterned skin. Researchers put nearly 500 of these frogs to the test on a hamster wheel-like contraption to find out how athletic each species is. The findings from this amphibian Olympics, published March 28 in the journal Proceedings of the National Academy of Science, revealed that the deadliest frogs are also the most vigorous.

"They're better able to extract oxygen from each breath and transport it to their muscles, just like well-trained athletes," study author Juan Santos of the National Evolutionary Synthesis Center in North Carolina said in a statement.

The researchers tested more than 50 species of frogs from Colombia, Ecuador, Venezuela and Panama, making the creatures walk in a plastic tube that rotated like a hamster wheel. After four minutes, the researchers estimated each frog's metabolic rate to figure out the animal's aerobic fitness.

Drab frogs may be less fit than their jewel-like cousins because of their life habits, said study researcher David Cannatella of the University of Texas, Austin. Poison dart frogs get the ingredients to make their toxins by eating certain ants and mites, Cannatella said in a statement. That means they have to range far and wide to find food, which could explain their athletic skills.

"Nontoxic species basically stay in one place and don't move very much and eat any insect that comes close to them," Santos said. "But the bright, poisonous frogs are very picky about what they eat."