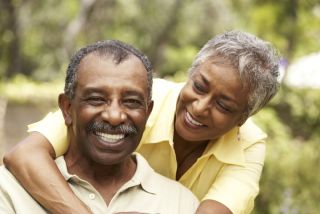 Older married couples who engage in sexual activity are more likely to be happy both with their relationship and their lives than those who have more infrequent sex, according to new research.

The find reveals the importance of sexuality in adults ages 65 and older, said study researcher Adrienne Jackson, a professor at Florida Agricultural and Mechanical University in Tallahassee.

"Highlighting the relationship between sex and happiness will help us in developing and organizing specific sexual health interventions for this growing segment of our population," Jackson said in a statement.

The research is based on the 2004 General Social Surveys, a nationally representative public opinion poll of English- and Spanish-speaking Americans ages 18 and older. Among the survey respondents were 238 married individuals who were 65 and older.

In this group, sexual activity was linked with both general and marital happiness, the researchers found. While only 40 percent of the individuals who had not had sex in the last 12 months said they were "very happy" with life, the number of "very happy" people who had sex more than once a month was 60 percent. [8 Tips for Healthy Aging]

The study is correlational, meaning that it's not clear whether sex makes older couples happy or whether happier older couples have more sex. But the results do highlight the need to consider the sexual lives of older adults, according to the researchers, who present their work Sunday (Nov. 20) at the Gerontological Society of America's annual meeting in Boston.

"This study will help open the lines of communication and spark interest in developing outside-the-box approaches to dealing with resolvable issues that limit or prevent older adults from participating in sexual activity," Jackson said.

One such barrier could be access to sexual education. Even if they got the best sex-ed course as teens, bodies and other sex-related factors change with age, said Michael Reece, a professor of health at Indiana University who wasn't involved in the current study, who spoke to LiveScience in February about adults having sex-toy parties to fill this education gap. Adult women are also turning to television personalities the likes of Dr. Oz for their sex questions.

And older adults do use this information, it seems, as another survey published in 2007 in the New England Journal of Medicine shows senior sex is swell. Though sexual frequency may decline with age, more than half of 75- to 85-year-olds in the study reported a roll in the hay at least two to three times a month, and 23 percent reported having sex at least once a week.