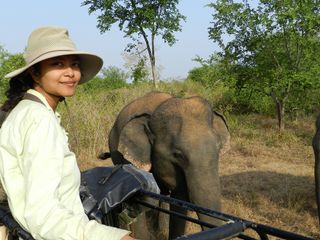 Shermin de Silva is hoping to raise money to hire and train an elephant-research assistant at the Uda Walawe Elephant Research Project, the first-ever long-term study of Asian elephants in the wild. The assistant is named Tharanga, an 18-year-old who grew up near the park. "I would be able to pay for him to have additional training, to take ecology classes or to go to conferences," de Silva told LiveScience. "I want to provide job security for at least five years and at that time we would be able to support him ourselves." Donate at her SciFund project page.
(Image: © Elizabeth Webber)

The mosquitoes are so thick John Gust can feel them hitting his arm as he sweeps a branch out of his way. After an hour-long boat ride through the Yucatan, he's hacking his way through the jungle surrounding an old rum distillery. It's hot, muggy and pouring rain, but Gust is on a mission to solve the murder of the distillery's last owner, Robert Stephens, who died in 1875.

Who put Gust, a doctoral student at University of California, Riverside, through this nightmarish trip? You did. His research trip to the Yucatan depends on funding gathered through the SciFund Challenge, a type of crowd-sourced funding where your money decides what science gets done.

The SciFund Challenge, which is being run by the online crowd-funding platform, RocketHub, opened Nov. 1 and runs through Dec. 15; those interested in donating can choose between 49 projects ranging from exploding duck penises and zombie fish to math models of political rallies and yeast-based cancer research.

"This is the first time that I know of in human history that science can be powered directly by the people," RocketHub founder Brian Meece told LiveScience. "Here's the chance for the common man or woman to make something happen."

And while the researchers involved hope to get their projects funded, they are just as interested in connecting the public with science.

"I see part of my responsibility studying elephants as a conservation effort and to communicate the science that I do," Shermin de Silva, director of the Uda Walawe Elephant Research Project, told LiveScience. "Scientists are typically not really rewarded for doing this … scientists are rewarded when they publish a paper."

Kristina Killgrove, who is trying to get her project on the DNA of Roman slaves funded, agreed: "It works to get the public involved. It's important for us as scientists to not just sit in our ivory towers and not just make science for other scientists, but also to bring our science to the public. "

SciFund donations fund small projects of all kinds. For example, Patricia Brennan and her colleague Diane Kelly, both researchers at the University of Massachusetts, are interested in studying the duck penis, which inflates incredibly quickly when inserted into a female. Brennan and Kelly want to design equipment to test how much force the exploding penis exerts and also to figure out how female ducks avoid injury from the explosive penis. [The Weirdest Animal Penises]

"People really like it, they find it interesting because it has to do with sex and with violence, which hits at people's interests and imagination," Brennan told LiveScience. "This is the perfect thing to get people to say 'I want to know more about this story.'"

Other projects could provide the baseline research needed to apply for larger grants. Zen Faulkes wants to go collect a crayfish that's the closest relative of a mysterious all-female crayfish species. With the data gleaned from setting up a colony and studying the two species, Faulkes can apply for a National Science Foundation grant.

"They aren't that far from me, they live in Florida and I'm in southern Texas," Faulkes, a researcher at The University of Texas-Pan American, told LiveScience. "It's just long and complicated enough that it's not free, it's not zero dollars. But it's just a little bit of time and a little bit of money to go collect some of those animals from the wild."

Even a little bit of money is hard to find these days, even the public is aware of government funding cuts. Most scientists rely on government funding to pay for their labs, equipment, training, expeditions and personnel. Sixty-five million dollars (about 1 percent) was cut from the National Science Foundation budget between 2010 and 2011; $260 million (0.08 percent) was cut from the National Institutes of Health, according to their websites.

Things look better for the 2012 budget, but previous cuts mean more competition for the remaining money, the researchers say. With small preliminary projects funded by a SciFund type program, researchers can strengthen their case for limited government funds.

"In science we have the equivalent of the World Bank, giant-sized funding, but where's the microfinance?" Faulkes asked "How can we support a project that's two-thousand bucks?"

Crowdfunding, or raising money from small donations made by a large number of people, has successfully made its mark in several different areas: New artists can rally their fan base to produce an album or to rent gallery space. Websites like Kiva.org crowdfunds microloans to buy a family a goat or build a village a well.

Why would it work in science? Meece believes it's all about the stories scientists are telling: "I think that a lot of the drivers that are driving these science projects for SciFund are the same as for any project. Real people making real things happen with a lot of passion," he told LiveScience. "That passion can be very contagious. The stories are very compelling."

To convince the masses that their project is worth pursuing, the researchers make their case using video, text, blog posts and "rewards" for donations. Some of the rewards include things like a snakeskin ($50 donation to The Yin Yang World of Venom project) or the right to name a lion cub ($1,000 contribution to the Serengeti Live project).

Only a few of the 49 SciFund projects have been successfully funded so far. These include a zombie fish project and a project studying the genes of ancient Roman slaves. What makes for a successful project? Communicating with one's social network helps.

"There was a large group of people that I could connect with, that I know they are already interested in science," Kelly Weinersmith, a graduate student at the University of California, Davis, and lead researcher studying parasites that turn fish into zombies, told LiveScience. "The general public is actually very excited about the science that's going on, but at the moment a lot of scientists don't communicate with them."

Many of the SciFund researchers are also striving to make a personal connection with their audience.

"What all of these crowdfunding campaigns have in common, is that to successfully fund your project you need to make a connection with them [the funders]," Jarrett Byrnes, SciFund organizer and researcher at the University of California at Santa Barbara, told LiveScience. "That's what will lead to successful funding of these projects."

John in the jungle

The researchers hope the funding will help fill in the end of their science stories. Gust may never discover just why Robert Stephens was killed in his rum distillery back in 1845, but his trip to the mosquito-ridden Yucatan will still lead to a better understanding of the historical and even the current state of the citizens of the Yucatan, if public funders get excited about his project.

"We may never really be able to solve the reason for this guy's murder, but you can look at the material evidence of how his workers lived and compare that to conditions elsewhere, and get some idea of what people were living in," Gust said. "He was either a really nice guy who treated his crew very well or a really terrible guy who didn't."

Plans for future rounds of SciFunding haven't been announced, but based on the public and the researchers' excitement, it's very possible Byrnes said. "We've just started this and really interested in finding out where this goes," he said. "People seem to be really excited about it."

In the future, SciFunding may look for non-profit routes, as RocketHub is a for-profit venture that collects 4 percent of the funds donated (if you reach your funding goal, 8 percent if you don't) and the credit card companies get a cut too, typically about 4 percent.

Either way, introduction of a new funding model could be something really important for the future of science funding. "If this is successful I can totally dream up a gazillion other things to do that would be totally doable," Brennan (the duck penis researcher) said. "It can really be transformative in many ways in how science is happening."