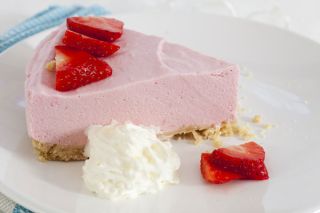 A study shows that this strawberry mousse will taste better thanks to the white plate beneath it.
(Image: © Charlotte Lake | shutterstock)

How do you make your strawberry mousse sweeter and richer-tasting? The answer isn't more strawberries and sugar. Instead, try serving it on a white plate.

A new study has shown that plate color affects how people perceive the flavor of the food they taste.

Scientists and marketers alike have long known color can affect how we perceive food. For instance, in 1957 marketing pioneer Louis Cheskin reported that adding 15 percent more yellow to green 7UP cans caused consumers to perceive the soft drink as having a more lemony-limey flavor.

To test how plate color might affect perception, the researchers gave small domes of strawberry mousse on white or black plates to 53 volunteers, who rated their treats' perceived sweetness, flavor intensity and quality, as well as how much they liked it.

The researchers also tested plate shape — using circular, square and triangular plates — however, this factor did not appear to have a substantial effect on how people perceived the mousse.

It is possible the color of the mousse appeared more intense against the lighter, white background than against the darker, black background, and that this visual illusion worked in favor of the white plate, write the researchers, led by Betina Piqueras-Fiszman, of the Universitat Politècnica de València in Spain and the University of Oxford in the United Kingdom, online Sept. 5 in the journal Food Quality and Preferences.

"In the future, it would be particularly interesting to further investigate the effects of other colors (or, more correctly, plates having different hues) and characteristics of the plates in order to discover possible ways in which to enhance the perception and experience of food, apart from modifying the ingredients of the food," they write.