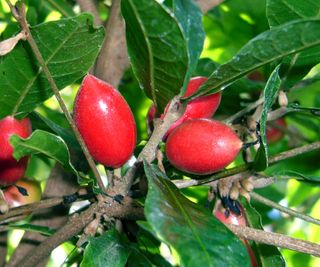 Biting into a lemon has never tasted so sweet. New research reveals the secret ingredient of a little red "miracle fruit," which turns sour into sweet. The results won't just make for sweet lemons, but could lead to more believable non-sugar sweeteners.

The effect of the fruit is so mind-bending it is even used during "flavor-tripping parties," where people pop a berry and eat sour foods. These parties received lots of attention after a New York Times article about the phenomenon in 2008. The effect from one berry, which costs around $2, lasts about an hour.

The researchers found that this little berry contains a special protein, called miraculin, which attaches to sweet-sensing taste buds. It seems to hold on tighter to these receptors when there are acids, which give foods a sour taste, in the mouth as well.

"Miraculin itself is flat in taste," study researcher Keiko Abe, of the University of Tokyo, told LiveScience in an email. "Under acidic conditions, MCL [miraculin] changes its molecular structure so that the binding gets much stronger."

This strong binding turns on the sweet switch in the taste bud cells, sending a "Hey, this is sweet!" signal to the brain. How this protein binds to our buds so sweetly could help in the design of new artificial sweeteners.

The miracle fruit, which goes by the scientific names Richardella dulcifica or Synsepalum dulcificum, was discovered in tropical West Africa in 1725 by a European explorer. He noticed that the locals chewed the berries before meals.

To figure out how the berry works, the researchers studied the interaction between miraculin and cells that were engineered to express either the mouse or human versions of the sweetness receptor. Since mice don't respond to miraculin, the researchers looked for differences between the human and mouse receptors, seeing what parts were important to send the sweetness signals. That way they isolated a small area on the human receptors that miraculin likely binds to and results in the sweetness effect.

"We scientifically solved the miracle riddle of why miraculin changes sourness into sweetness in the mouth," Abe said. Miraculin works differently than other known sweeteners, including calorie-free sweeteners found in diet sodas, which bind to a different area on our taste receptors.

"At acidic pH in the mouth, it changes the sour taste of any acidic substance into sweetness and can thus be used as a sweetener only for sour foods such as lemon, vinegar, beer and so on, although most common foods are acidic to a greater or lesser extent," Abe told LiveScience. "So, the utility of this protein may be very large."

Researchers are currently working on ways to "grow" miraculin in the lab, by designing other fruits or vegetables that can make the protein, including lettuce or microorganisms like mold.

The study was published today (Sept. 26) in the journal Proceedings of the National Academy of Sciences.