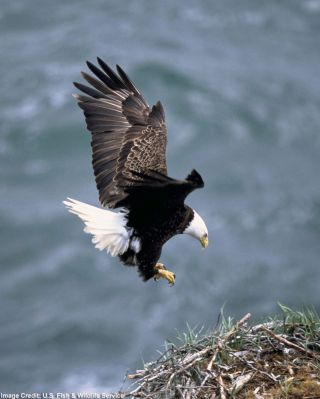 Throughout history, humans have admired eagles for their fierce beauty and strength, often using them to symbolize power and grace and independence. Eagles have powerful talons for tearing flesh and their beaks are nearly as long as their heads. Too large to chase prey through the air effectively, eagles typically hunt by dropping from the sky in surprise attacks. Solitary creatures, eagles mate for life and will use the same nestÃ¯Â¿Â½some of which are over 10 feet acrossÃ¯Â¿Â½each year. ----- Range: Worldwide. Characteristics: Large, hooked beak, strong legs and powerful talons. They resemble vultures but have fully feathered heads and hunt live prey.

Top speed for airplanes is assumed to be limited by simple rules of aerodynamics. But birds seem to break these rules in new research that underscores how complex nature can really get.

The fastest speeds at which the smallest insects and the largest aircraft can fly are typically expected to depend solely on how much they weigh and how large their wings are.

Animal ecologist Thomas Alerstam at Lund University in Sweden and his colleagues collected radar data on the flight speeds of 138 bird species, ranging from songbirds weighing less than an ounce to 20-pound swans.

The researchers found the difference in speed between small and large birds was not as great as the rules of aerodynamics might predict. They figure evolution forces birds to adopt speeds that better fit their lifestyles. For instances, large birds may fly slower than expected because high speed can prove inconvenient, "especially during takeoff, maneuvering and landing," Alerstam explained.

Related species often flew at comparable speeds regardless of weight or wing size, backing the notion that evolution influences speed. For instance, birds of prey had slower flight speeds than predicted, while songbirds were faster than predicted, findings detailed online July 16 in the journal PLoS Biology.

The precise reasons why bird flight is more complex than expected remain uncertain, but the shapes of wings and the way they flap likely play major roles. Understanding these hidden differences and the evolutionary forces behind them "could inform engineers on what special kinds of flight are needed for aircraft for special purposes, such as small flying robots carrying surveillance cameras into dangerous zones," Alerstam said.