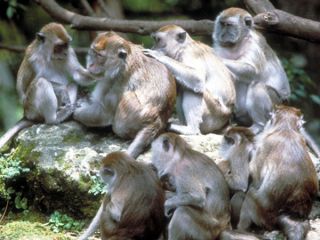 Many primates, including humans, are unusually social animals. We spend our lives eating, traveling, even sleeping in constant association with others in our group.

A new study casts light on how this came to be. Our earliest ancestors apparently became social creatures when they gave up the night life.

Researchers from the University of Oxford delved into our evolutionary history by building a family tree for 217 primate species whose social habits are known. Working backward from the present, they found that early primates were nocturnal animals that lived solitary lives until about 52 million years ago. Our early ancestors apparently transitioned to life in large groups at the same time they shifted to becoming active during the daytime.

From here, other social structures evolved, such as isolated pairs and harems, in which a single male lives with multiple females. [Human Origins: Our Crazy Family Tree]

"What we did is use the pattern of relatedness between living species to say, 'If we step back one level, what is the likely social system of the ancestor of this group?'" said lead researcher Susanne Schultz, a research fellow at Oxford.

The first ancestral primates lived about 74 million years ago and were solitary foragers, similar to living prosimians, which include lemurs and lorsises. Researchers concluded that by the time our primate ancestors were more monkeylike, they had begun living in large groups including both sexes. Other social structures emerged later.

Working backward through the family tree, also called a phylogenetic tree, made sense because among living primates, closely related species usually have the same social arrangements, Schultz told LiveScience. However, it became trickier when focusing on the great apes — chimpanzees, gorillas, orangutans and us — because each organizes itself differently, she said. [10 Things That Make Humans Special]

Humans are the most flexible of all. Human societies have social structures resembling, at least to some degree, those found throughout the primate world, including living in pairs or harems or, in some traditional societies, in families structured around related members of one sex — sisters, mothers and daughters or brothers, fathers and sons.

Alternative theories suggest that social structure emerged as a result of resource availability, or that social structure made steplike increases in complexity over time, starting from solitary to pairs to small groups and so on. Evidence for the later theory has been found among social insects and birds.

Schultz and her colleagues used mathematical models of these scenarios, as well as the scenario suggested by the family tree, to test their likelihood. The results supported the idea that early primates transitioned directly from solitary lives to living in large groups, supporting what they found in their family-tree analysis.

They also calculated that a tipping point in social structures happened around 52 million years ago, and that afterward primates were more likely to live in social groups than by themselves.

This timing is significant because it coincides with the transition to a diurnal life.

The ancestral primates were small, forest-dwelling creatures with large eyes, indicative of animals active at night. This life helped them to avoid predators, but made it harder to find food, which most likely prompted some to switch to being active during the day, about 52 million years ago.

Life during the day, however, was more dangerous for the early primates, because their primary predators, eagles, were also awake and hungry. Transitioning about this time to life among large groups would make sense, since animals tend to find safety in numbers, Schultz said.

"History is massively important in understanding why we are social in the way we are social," Schultz said. "When you look at the phylogenetic tree, what sort of hits you over the head is how inflexible in some ways many primates are and how important your history is in what you do."