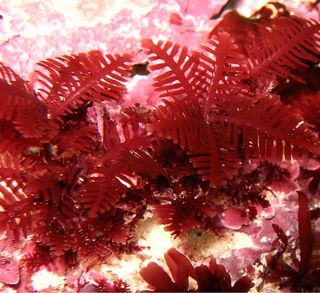 Continued warming in the oceans around Australia could have dramatic effects on the seaweed that live in these waters, pushing their ranges south, and eventually, off the continental shelf. Changes in seaweed communities could have dramatic effects on other living things, since seaweeds provide habitat and food. Above, the Australian seaweed Pterocladia retangularis.
(Image: © Thomas Wernberg)

Warming ocean waters could force hundreds of Australian seaweed species to shift southward in search of cooler waters, and eventually, force them off Australia's continental shelf, and possibly into extinction, according to a study.

Seaweed act as "trees of the ocean," providing food, shelter and habitat for many other living things.  As a result, changes in the seaweed community could have cascading affects, according to study researcher Thomas Wernberg of the University of Western Australia.

Using herbarium records of seaweed species, Wernberg and colleagues looked at shifts in temperate seaweed communities in the Indian and Pacific Oceans around Australia over the past 50 years. They found that seaweed species have already begun to respond to warming — which has been causing water temperatures to increase by about 0.007 degrees Fahrenheit (0.013 degrees Celsius) per year in the Indian Ocean over theWestern Australian continental shelf, and 0.013 degrees F (0.023 degrees C) warming per year on the Pacific side, fed by the East Australian Current.

"We found that temperate seaweed communities have changed over the past 50 years to become increasingly subtropical, and that many temperate species have retreated south towards the Australian south coast," Wernberg said.

So seaweed species adapted to warmer waters are starting to increase their populations in these once-cooler waters, while the temperate species are showing up farther south.

"By extending the observed rates of poleward retreat to other species in the southern Australian seaweed flora, we estimated that projected ocean warming could lead to several hundred species retracting south and beyond the edge of the Australian continent, where they will have no suitable habitat and may therefore go extinct," he said.

The projected warming — of between 1.8 degrees F (1.0 degrees C) by 2030 and 5.2 degrees F (3 degrees C) by 2070 — plus the rates of seaweed shift they calculated could mean the potential loss of 100 to 350 species over the next 60 years as the seaweeds' suitable habitat too far south. These represent about a quarter of all southern Australian seaweed flora.

Seaweeds can live anywhere between the high tide mark and about 262 feet (80 meters) deep. Past the edge of the continental shelf, the water's depths drop down to more than 0.6 miles (1 kilometer), water far to deep for seaweeds to inhabit. The width of the continental shelf along southern Australia varies, according to Wernberg.

Of the species that could be pushed over the edge, most live elsewhere in the world, meaning these extinctions would be local, but about a quarter face complete extinction if warming has the expected effect.

"Even if our simple, back-of-the-envelope calculation is an overestimate, it implies a considerable risk of substantial loss of global species diversity," the researchers write in a study published online on Oct. 27 in the journal Current Biology.