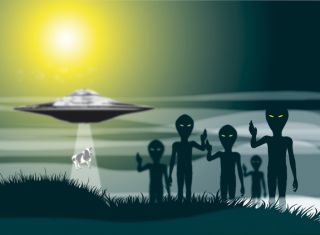 Researchers say they have conducted "the first experiment to ever prove that close encounters with UFOs and extraterrestrials are a product of the human mind."

In a sleep study by the Out-Of-Body Experience Research Center in Los Angeles, 20 volunteers were instructed to perform a series of mental steps upon waking up or becoming lucid during the night that might lead them to have out-of-body experiences culminating in perceived encounters with aliens. According to lead researcher Michael Raduga, more than half the volunteers experienced at least one full or partial out-of-body experience, and seven of them were able to make contact with UFOs or extraterrestrials during these dream-like experiences.

Raduga designed the experiment to test his theory that many reports of alien encounters are actually instances of people experiencing a vibrant, lifelike state of dreaming. If he could coach people to dream a realistic alien encounter, he said, that could prove that many reports of such encounters — such as alien abductions that take place during the night — are really just products of peoples' imaginations. Raduga's OOBE Research Center is not affiliated with any academic institutions, and the new research has not been published in a peer-reviewed journal.

"When people experience alien abductions in the night, they usually don't know they are actually in REM sleep and having an out-of-body experience," Raduga told Life's Little Mysteries, adding than an estimated 1 million Americans have such experiences each year. "It's very realistic and people cannot understand how it happens. [Our study] shows that it's not about aliens, it's about human abilities, and it can happen to almost anyone." [7 Things that Create Convincing UFO Sightings]

"Some could do it by the first attempt. Some needed three to five attempts to have an out-of-body experience.  Not everybody could do it — some were unable to do it because of their fear. They were able to separate from their body but they became too afraid to look for aliens," Raduga said.

By the end of the study, 35 percent of the volunteers said they had made visual contact with aliens, and they described their encounters for the researchers.

One participant, identified as Alexander N., recalled making a successful attempt to separate from his body: "I [then] tried to find aliens. Three of them materialized right before my eyes. They seemed more like creatures from the movie 'The Thing' than tadpoles with eyes like Princess Jasmine. They wanted to scare me, not to 'make contact.' As a result, I was extremely frightened and regained awareness in my own body."

Raduga plans to publish his results and to conduct further studies on humans' ability to fabricate alien encounters that seem real.