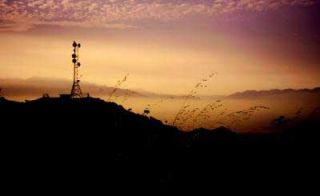 The brownish haze that shrouds skylines in the cities of several countries including the United States is primarily composed of gases that form in the air, not the tiny pollution particles directly emitted from the Earth's surface, a new study indicates.

The gases and particles emitted by power plants, motor vehicles and even natural sources such as volcanoes can undergo reactions in the atmosphere that transform them into the haze-forming gases.

It is these chemically formed gases that make up about two-thirds of the organic haze in urban areas and more than 90 percent of the haze in rural areas, according to the study, detailed in the July 7 online issue of the journal Geophysical Research Letters.

The study scientists compared the concentrations of directly emitted particles, or primary aerosols, with chemically formed, or secondary, aerosols in urban areas, downwind areas and rural areas from 37 sites in 11 countries, including the United States, Japan, China and Germany.

“What we’re seeing is that concentrations of secondary organic aerosols decrease little downwind from urban areas,” said Jose-Luis Jimenez of the University of Colorado at Boulder. “That tells us that there has to be an extended source or continuous formation for the pollution.”

Jimenez and his colleagues think that this extended source is a set of colorless, reactive gases called volatile organic compounds (VOCs), the same gases that form smog, or particularly dense haze. VOCs are emitted by motor vehicles, gasoline evaporation and some industrial processes, as well as by vegetation.

Jimenez said they think the VOCs are emitted in urban areas and then immediately begin reacting and sticking to particles to increase pollution.

“We think the gases react over a few days as the air travels downwind into more rural regions, producing more organic haze,” he said.