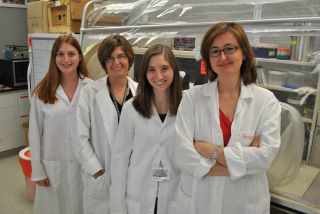 When people enter microbiologist Gemma Reguera's lab at Michigan State University, one of the first things they notice is that it's staffed nearly with all female researchers. Ever since Reguera was six years old, she knew that she wanted to be a microbiologist. Once her career began in earnest, she also knew that she wanted to be a role model for women in science. And she's been successful on both fronts.

Reguera has also succeeded in deciphering how microbes — specifically Geobacter bacteria — can play a key role in cleaning up nuclear waste and toxic metals. The revelation that Geobacter's conductive pili or nanowires do the hard job of cleanup has put Reguera's research on an interesting course. Reguera is working to improve and patent Geobacter's nanowires, which perform nature's version of electroplating with uranium (an electrochemical process used to make metallic coatings from soluble metals) which effectively immobilizes radioactive material and prevents it from leaching into groundwater.

The next phase of her efforts could lead to microbial fuel cells that generate electricity while cleaning up after environmental disasters — not a bad combination. See a video of Reguera in a recent interview conducted by the National Science Foundation answering the ScienceLives 10 Questions below.