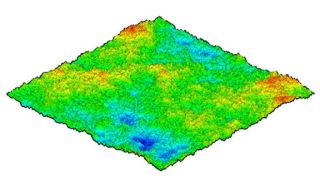 Computer-simulated topography shows high points — asperities (in red) — on the rock surface. When in contact with asperties on the adjacent surface, these asperities may undergo intense flash heating in an earthquake.
(Image: © Mark Robbins and Sangil Hyun, Johns Hopkins University)

The heat from rocks scraping against each other could be a major cause of faults weakening in the beginning stages of earthquakes, scientists have found.

When rocks grind against each other, they generate extreme temperatures at scattered microscopic bumps, called asperities, where they make contact. This process is similar to producing heat by rubbing your hands together, but on an extreme scale.

At major faults such as the San Andreas in California, researchers think flashes of heat from rocks shearing past each other melts the rock. This makes the rocks slippery at those microscopic contact points, lowering the friction between them enough to trigger a significant amount of stress and setting the stage for an earthquake.

To learn more about this flash heating, scientists rubbed together different types of rocks commonly found in faults, such as quartzite, granite and gabbro. They simulated earthquake speeds of close to 1.6 feet per second (0.5 meters per second). The bumps, or asperities, each had a surface area of less than 10 microns wide, or about a tenth of the diameter of a human hair.

The researchers found that intense flash heating could heat asperities dramatically, perhaps up to 3,270 degrees Fahrenheit (1,800 degrees Celsius), enough to melt most rock types associated with earthquake faults. Remarkably, this intense heat was confined to the hot spots — the temperature of the surrounding rock remained largely unaffected. Still, it could cause friction between rocks to drop significantly across distances of just 1.7 inches (4.5 centimeters).

These findings hint that flash heating may be a major contributor to the weakening of faults during both small earthquakes and the early stages of large quakes.

"These findings give us a much clearer picture of what might be happening at faults during an earthquake, and has implications on how earthquake ruptures travel within the earth," researcher David Goldsby, a geophysicist at Brown University, told OurAmazingPlanet.

Although this current work slid bare rock surfaces past each other, future research could see what heating might occur when surfaces covered with ground-up rock are rubbed against each other for a potentially even more realistic scenario, Goldsby said.

Goldsby and his colleague Terry Tullis detail their findings in tomorrow's (Oct. 14) issue of the journal Science.