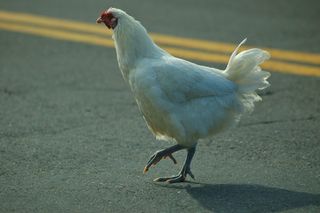 Domestic chickens use Earth's magnetic field to keep them on track.
(Image: © dreamstime.com)

The jury is still out on why the chicken crossed the road. But new research reveals an inbuilt magnetic compass guides domestic chickens when they do venture across the asphalt and other surfaces.

Many animals have an innate sense of direction, finding their way along migration routes that extend thousands of miles. Often, they detect Earth’s magnetic field and use that for orientation.

The new study focuses on birds. Study leader Wolfgang Wiltschko of Frankfurt University had been the first to show that migrating European robins rely on the Earth’s magnetic field to navigate during migrations. That finding came more than 40 years ago, and since then a similar magnetic compass has been found in more than 20 bird species, mostly songbirds.

Most recently, Wiltschko and his colleagues found domestic chickens are equipped with magnetic sensors that work like compasses.

They trained newly hatched chicks of domestic chickens to associate a red ball with their “mother.” At each corner of a pen (where the chicks were kept), designed to correspond to a magnetic North, South, East and West grid, they placed a white screen. Then they hid the ball behind one of the four screens and taught the chicks that the red-ball mother was always behind the screen in the magnetic North corner.

“They tend to head into the direction where they were trained to find their ‘mother,’” Wiltschko told LiveScience.

The scientists rotated the magnetic field so that magnetic North corresponded to the geographic East direction. When the chicks were let go in the pen, “they shifted their search activity accordingly, demonstrating that they relied on the magnetic field,” Wiltschko said.

The magnetic sensors are probably located in the chicks’ eyes, where its photoreceptors detect light, Wiltschko said. He and his colleagues deduced this from an experiment which showed that the birds could orient themselves under blue light but lost all sense of direction under longer-wavelength lighting.

Chickens and robins evolved from a common ancestor at least 66 million years ago. Finding that both birds have a similar magnetic compass suggests birds developed this ability far back in their evolutionary history, before the behavior of migration showed up in their family tree.

“This suggests that the avian magnetic compass may have evolved in the common ancestor of all present-day birds to facilitate orientation within the home range,” the scientists write in their research paper published in the July 1 issue of the Journal of Experimental Biology.