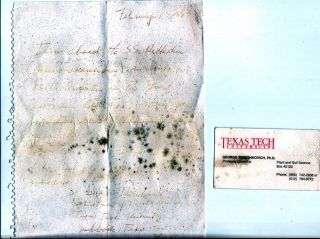 The letter was difficult to read because of sun damage, but the Australian couple said the Texas Tech business card was in good condition.
(Image: © Texas Tech)

After 14 years and an ocean trek measuring a quarter of Earth's waistline, a message in a bottle has popped up in the dunes along the beaches of Southwestern Australia's Big Quaram Beach.

On Feb. 19, 1997, retired Texas Tech professor George Tereshkovich, aboard the Holland-America's grand ocean liner SS Rotterdam, wrote out his missive, addressing it to an anonymous recipient who might find it and promising him or her $5. As the sun set, Tereshkovich, a plant and soil scientist, tossed the sealed bottle, which also included his business card, into the ocean. [See images of letter and Tereshkovich]

"I told the wife what I was going to do," the 81-year-old said in a statement. "She thought I was seasick or something, throwing a note overboard. We continued cruising, and I completely forgot about it."

Message in a bottle

At the time he wrote the note, Tereshkovich and his wife were on a cruise ship that had left from San Diego, Calif., to go around the world and disembark in Ft. Lauderdale, Fla., 102 days later. Right after crossing the equator, the idea for the message hit him.

"I remember I wrote February 1997, and I told them I was on a world cruise with my wife," he said. "I said 'to the finder of this note, I will award them $5 if they send me the message back.' But I wondered, 'What address do I give to return my letter?' Well, I knew that Texas Tech University was always going to be here, so I used a Texas Tech address, put my business card in there and I threw it overboard."

Diane Chanut spotted the bottle while vacationing at Big Quaram Beach with her partner, Luke McLaren. [Stunning Sands Gallery: A Rainbow of Beaches]

"I caught sight of the bottle on a dune a bit out from the tide line, and Luke volunteered to go check it out," Chanut said in a statement. "What was our surprise when, upon inspection, the said bottle did include some form of paper in it. We opened up the bottle to get the piece of paper out. It was very faded by the sun, but we managed to read it and also found the attached business card, which was in very good condition."

To celebrate the find, the couple took a photo of the message. They were also hoping to get in touch with the sender.

The condition of the bottle and letter suggested this wasn't a scam, convincing the couple to follow up on the discovery.

"I obviously wasn't sure if we were going to get an answer or not, but I figured that if the person who dropped the bottle went through this exercise, they would probably be glad to get an answer and thus would probably get back to us," Chanut said. "Also, the university address was a good place to make sure we would be able to track down the whereabouts of the sender in case he was no longer working there, so that was also upping our chances of hearing back from the mysterious sender."

After having little luck finding contact information by Googling Tereshkovich's name, Chanut emailed the dean's office at the College of Agricultural Sciences and Natural Resources to ask how to get in touch with the retired professor.

Since the time he wrote the letter, Tereshkovich had moved to Austin, Texas, and never got into using email. A secretary there said that she would pass her note along to Tereshkovich.

A few days later, Tereshkovich found a letter from Texas Tech in his mailbox.

"I thought, 'Here's the dean asking for more money,'" he said, joking. "I opened it up. When I read it, I was stunned someone found my bottle with the message."

Tereshkovich responded in kind with a letter.

"We were completely blown away when we received Dr. T's letter a few days after that," Chanut said. “It was so heartfelt and so generous to us. He included some souvenirs from the U.S., such as postcards from his home in Lubbock, a couple of $2 notes and the 'reward' he remembered promising in his letter ($5 plus inflation from 1997), so we could treat ourselves to a nice bottle of Barossa Valley wine next time we were in town."

Chanut added, "We could read the excitement in his words, and it was such a great story to tell around us as well."

Over the next two or three years, Tereshkovich said he plans to save up for a cruise to Australia and take an excursion to Alice Springs to meet the couple.