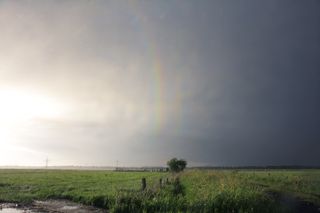 Forget the double rainbow. This year, the quadruple rainbow is all the rage.

A new photograph shows the first-ever evidence of an elusive fourth-order rainbow.

The spectacle in the image looks like a double rainbow, because it only shows the third-order (tertiary) rainbow (left), accompanied by the fourth-order (quaternary) rainbow (right). They appear on the sunward side of the sky, at approximately 40 degrees and 45 degrees, respectively, from the sun. Tertiary and quaternary rainbows can only form on the same side of the sky as the sun, unlike primary and secondary rainbows. As such, the primary and secondary rainbows are on the other side of the sky and so not shown in the new photo.

Few people have ever claimed to see even three rainbows in the sky at once. Scientific reports of these phenomena, called tertiary rainbows, were so rare — only five were reported in 250 years — that until now many scientists believed they were as real as a pot of gold at the end of a rainbow.

These legendary optical rarities, caused by three reflections of each light ray within a raindrop, have finally been confirmed, thanks to photographic perseverance and a new meteorological model that provides the scientific underpinnings to find them. The work is described in a series of papers in a special issue published this week in the journal Applied Optics. [Related: Weirdo Weather: 7 Rare Weather Events]

The optical treasure hunt even went one step further, as revealed in the photo that shows the shimmering trace of a fourth rainbow.

One year ago, Raymond Lee, a professor of meteorology at the U.S. Naval Academy, predicted how tertiary rainbows might appear and challenged rainbow chasers to find them.

Although staggeringly rare, tertiary and quaternary rainbows are natural products of the combination of refraction, dispersion and reflection inside raindrops. These are the same processes that create all rainbows, yet they are taken to their extreme to produce these higher order variants. Refraction is when sunlight bends as it moves from air into water and vice versa. (Such bending makes oars look bent when partially submerged.) Water droplets bend each of the colors in sunlight by a slightly different angle. This is called dispersion, and it separates the colors to create a rainbow.

Most of that multicolored light passes through the other side of the raindrop, but some is reflected. The raindrop's spherical curves concentrate those reflections at 138 degrees from the sun. This concentrated light is bright enough to create a visible primary rainbow.

A double rainbow occurs because not all that light exits the raindrop. Some is reflected back into the raindrop and goes through the whole process again. Although this light is dimmer, sometimes it is bright enough to produce a secondary rainbow just outside the first.

A third series of reflections creates a tertiary rainbow. It is even dimmer than the secondary rainbow, and much harder to find because instead of forming away from the sun, a tertiary rainbow forms around the sun. To see it, observers have to look into the sun's glare.

This may be why only five scientifically knowledgeable observers had described tertiary rainbows during the past 250 years.

Lee reviewed each description. He eliminated one questionable account and found common elements in the others. All described tertiary rainbows that appeared for a few seconds against a dark background of clouds about 40 degrees from a brightly shining sun.

Along with colleague Philip Laven, Lee used a mathematical model to predict what conditions might produce visible tertiaries. First, they needed dark thunderclouds and either a heavy downpour or a rainstorm with nearly uniformly sized droplets. Under these conditions, if the sun broke through the clouds, it could project a tertiary rainbow against the dark clouds nearby. The contrasting colors would make the dim tertiary visible.

When Lee presented his findings at last year's International Conference on Atmospheric Optics, it sparked heated discussion. Some scientists insisted that past descriptions were wrong and that tertiaries were too dim to see in the sun's glare.

One attendee, Elmar Schmidt, an astronomer at Germany's SRH University of Applied Sciences in Heidelberg and a rainbow chaser, took the guidelines as a challenge. He alerted likeminded amateurs. Since then, Michael Grossman and Michael Theusner have snapped photos of tertiary rainbows and one photo of a quaternary rainbow. Both images, which underwent only minimal image processing to improve the contrast under these challenging photographic conditions, also appear in the Applied Optics special issue.

The day Grossman photographed the tertiary rainbow, he first recalled seeing a double rainbow. When the rain intensified, he knew he had to turn toward the sun.

"It is really exaggerated to say that I saw it, but there seemed to be something," Grossman said. The pictures he snapped in the rain were the first to show a tertiary rainbow.

Of the noteworthy discovery, Lee said, "It was as exciting as finding a new species."