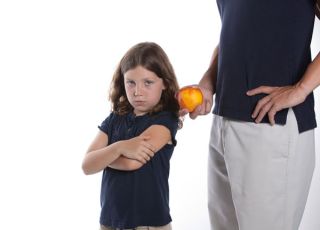 You can lead a child to broccoli, but you can't make him eat it, the old saying goes. Oh, it doesn't? In any case, a new study suggests this is the reality for parents — those who pressure their kids to chow down produce youngsters who are more likely to be picky eaters.

The answers given by 104 mothers of children ages 3 through 6 in the United Kingdom to questions about their kids' behaviors showed that urging them to eat significantly raised the chances the kids would dig in their heels and refuse. The study also found that food avoidance was more common in children of certain emotional temperaments, as well as those of parents who use food to shape behavior and don't encourage a varied, balanced diet. "Healthy children are born able to regulate their hunger and fullness," said study author Claire Farrow, a senior psychology lecturer at Loughborough University in Leicestershire, England. "These findings support other research which has shown that if parents or caregivers override their children's signals of hunger and fullness — as in pressuring the child to eat when not hungry — then often children struggle to regulate their appetite appropriately in the future," Farrow told MyHealthNewsDaily. And for kids who are already fussy eaters, "the use of pressure to eat can exacerbate problems and conflict at mealtimes," she said. The study will be published in the December issue of the journal Appetite. Gentle encouragement The mothers in the study were predominantly white, well-educated and of healthy weight. They rated several of their kids' behaviors surrounding mealtimes, including food fussiness, slowness in eating, under-eating in response to emotional states and how quickly children said they felt full. The moms also assessed their own "dietary restraint," or how often they tried to eat less than they would prefer to. Those who reported more child fussiness over food also said they used much more pressure to get their children to eat, or restricted various foods for health reasons. Mothers who said their children ate slowly also reported using more pressure to compel their kids to eat. But isn't a certain amount of persuasion necessary, when it comes to broccoli or other nutritious foods? Farrow said it depends on whether the goal is to get kids to simply eat more or to try a new food. "If the aim is to get the child to eat more food because the parent wants the child to, then this has shown to be counterproductive. Children should be allowed to stop eating when they are full if they are to be able to regulate their appetites appropriately," she said. "However, if the aim is to get the child to try a new food that they do not want to, then some recent research has shown that gentle encouragement and positive reward for trying new foods can be a successful strategy," Farrow said. Letting kids take the lead Parents should offer a range of nutritious foods at mealtimes and snacks, and then sit back and let their children take the lead, said Dr. Anne Eglash, a clinical professor of family medicine at the University of Wisconsin School of Medicine and Public Health. The same strategy is employed by breast-feeding mothers, she noted, who never really know how much milk their child consumes and allow their babies' natural hunger cues to dictate feedings. "My personal feeling is that, yeah, we want our kids to eat broccoli, but how are they to eat broccoli when . . . crackers are on the table?" Eglash said. "If you take away those (less nutritious) choices and have only healthy foods there, kids will choose that." Farrow and Eglash agreed that it's difficult to determine if parental control of feeding practices might produce kids who one day become obese or develop eating disorders. But both said it is possible to "covertly control" kids' feedings to encourage more nutritious choices or higher consumption simply by being consistent. "Let kids drive when they're hungry, don't force feed them when they're not, don't fret about it and don't offer junk food to make up for when kids don't want to eat," Eglash recommended. "When kids are little, I tell parents: Don't worry, they won't starve themselves. You don't want food to be the power struggle or the big reward." Pass it on: Kids who are pressured to eat might become picky eaters, but offering healthy options and encouraging kids to try new foods might stave off mealtime conflicts.