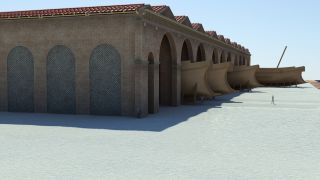 A computer-created image of the large Roman shipyard that has been uncovered at Portus — the ancient port of Rome. Researchers have uncovered the remains of a massive building close to the distinctive hexagonal basin or 'harbor,' at the center of the port complex.
(Image: © The Portus Project)

They found the remains of a massive building, dating to the second century, where ancient ships were likely built close to the distinctive hexagonal basin, or "harbor," at the center of the port complex.

"Few Roman Imperial shipyards have been discovered and, if our identification is correct, this would be the largest of its kind in Italy or the Mediterranean," dig director Simon Keay, of the University of Southampton, said in a statement. [See image of ancient shipyard]

Portus was a crucial trade gateway linking Rome to the Mediterranean during the Imperial period (27 B.C. to A.D. 565). The area was initially built during the time of Emperor Trajan (A.D. 98 to 117). Excavation at the site has revealed that it had many uses, including to store grain and as a defensive measure.

The shipyard building — measured at 475 feet (145 meters) long and about 200 feet (60 m) wide — was about three times the height of a double-decker bus. Within the building, large brick-face concrete pillars, some nearly 10 feet (3 m) wide and still visible in part, supported at least eight parallel bays with wooden roofs.

"This was a vast structure, which could easily have housed wood, canvas and other supplies and certainly would have been large enough to build or shelter ships in. The scale, position and unique nature of the building leads us to believe it played a key role in shipbuilding activities," Keay said.

The researchers note they haven't found evidence of boat-moving ramps that would have been needed to launch newly constructed boats from the shipyard. These ramps may be beneath the more recent embankments, or they could have been destroyed.

"At first we thought this large rectangular building was used as a warehouse, but our latest excavation has uncovered evidence that there may have been another, earlier use, connected to the building and maintenance of ships," Keay said. "Few Roman Imperial shipyards have been discovered and, if our identification is correct, this would be the largest of its kind in Italy or the Mediterranean."

The team previously unearthed the remains of an "Imperial palace" and an amphitheater on the site near the newly unearthed shipyard. Keay said the area formed a key complex where officials coordinated the movement of ships and cargo through the port.

Portus also contains inscriptions describing a guild of shipbuilders and a mosaic that once adorned the floor of a villa on an ancient road southeast of Rome, now on display in the Vatican Museum. The mosaic shows the facade of a building like the one at Portus with a ship in each bay.