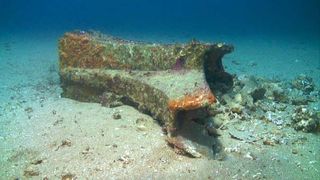 The ram of an ancient warship discovered recently near Sicily could help establish where the famous last battle of the first Punic War took place.
(Image: © RPM Nautical Foundation)

The remains of a sunken warship recently found in the Mediterranean Sea may confirm the site of a major ancient battle in which Rome trounced Carthage.

The year was 241 B.C. and the players were the ascending Roman republic and the declining Carthaginian Empire, which was centered on the northernmost tip of Africa. The two powers were fighting for dominance in the Mediterranean in a series of conflicts called the Punic Wars.

Archaeologists think the newly discovered remnants of the warship date from the final battle of the first Punic War, which allowed Rome to expand farther into the Western Mediterranean.

"It was the classic battle between Carthage and Rome," said archaeologist Jeffrey G. Royal of the RPM Nautical Foundation in Key West, Fla. "This particular naval battle was the ultimate, crushing defeat for the Carthaginians."

The shipwreck was found near the island of Levanzo, west of Sicily, which is where historical documents place the battle.

In the summer of 2010, Royal and his colleagues discovered a warship's bronze ram — the sharp, prolonged tip of the ship's bow that was used to slam into an enemy vessel. This tactic was heavily used in ancient naval battles and was thought to have played an important role in the Punic fights.

The ram is all that's left of the warship; the rest, made of wood, apparently rotted away.

"There's never been an ancient warship found — that's the holy grail of maritime archaeology," Royal told LiveScience. "The most we have are the rams and part of the bow structure."

Yet a ram alone can reveal intriguing clues about what these archaic vessels were like.

"The ram itself gives you a good idea of how the timbers were situated, how large they were, how they came together," Royal explained.

The new ram is the third such recent discovery near that site.

In 2008, the same team uncovered a beaten-up warship ram with bits of wood still attached, which the scientists were able to carbon-date to around the time of the end of the first Punic War.

Another ram that had been pulled out of the water by a fishing boat three years earlier in the same area bore an inscription dating it to the same time period.

This third ram, Royal said, is almost identical in shape and size to the one found in 2008.

"At this point you've got to begin to say, 'We have for the first time archaeologically confirmed an ancient naval battle site,'" Royal said.

The researchers can't be absolutely sure whether the new ram belonged to a Roman or a Carthaginian ship, but Royal's betting on the latter.

The inscription on the first ram, brought up by the fishermen, was in Latin, establishing that one as Roman. It was decorated with intricate carvings, including rosettes.

By comparison, the rams found in 2008 and this year are plain, with no decorations, and rough finger marks still left from when the cast was made.

"They were very utilitarian, very hastily made," Royal said.

That fits in with the historical accounts of the Carthaginians. While Rome already had a standing fleet before the war, "the ancient sources state that the Carthaginians hurried to rush a fleet together very quickly and then outfitted the ships and sent them off," Royal said.

Plus, because the Carthaginians were the losing side of this battle, more of the sunken ships belonged to them than to Rome.

All in all, the evidence points toward the newly discovered ram belonging to Carthage, Royal said.

Royal and Sebastiano Tusa of Sicily's Superintendent of the Sea Office are co-directors of the RPM Nautical Foundation. For more information about their work, visit the RPM site.