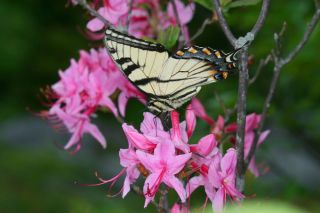 The Appalachian tiger swallowtail butterfly is a rare breed: Some 100,000 years ago, two different species mated and their hybrid offspring gave rise to the Appalachian species, researchers have found.

The researchers were surprised to find the Appalachian species' parents were the Canadian tiger swallowtail and the Eastern tiger swallowtail. This hybridization is not the traditional way that new species are born; typically, interspecies mating produces hybrids that will be unable to reproduce on their own. [See images of swallowtail butterflies]

"How new species form is one of the central questions in evolutionary biology," study researcher Krushnamegh Kunte, currently at Harvard University, said in a statement. "Hybrid speciation is more common in plants, but there are very few cases in animals."

The Appalachian tiger swallowtail (Papilio appalachiensis) appropriately makes its home in the Appalachian Mountains, which run along the eastern edge of North America — from the Canadian province of Newfoundland and Labrador all the way to Georgia in the United States. The Eastern tiger swallowtails prefer warmer weather and lower elevations, while the Canadian swallowtails keep to higher altitudes and colder climates.

The Canadian and Eastern butterflies seem to have created this hybrid species about 100,000 years ago. "That's not a very long time," said Kunte, who began his research while at the University of Texas at Austin. "But still we found that the Appalachian tiger has been isolated long enough to have a different appearance and genetic makeup than its parent species."

The Appalachian swallowtail is officially its own species, though it can still reproduce with either of its parental species. Interspecies mating happens rarely, even though the Appalachian's range borders the Canadian butterfly's range in the north and the lower altitudes of the eastern parts of the mountain range.

Researchers tend to think most species arise from a gradual diversification of one species into two distinct groups that become unable to breed with each other, either because of a buildup of genetic differences or because they are physically separated from each other by a barrier such as an ocean.

This is probably how the Canadian and Eastern swallowtails became two species, the researchers said, around 600,000 years ago.

The study was published Sept. 8 in the journal PLoS Genetics.