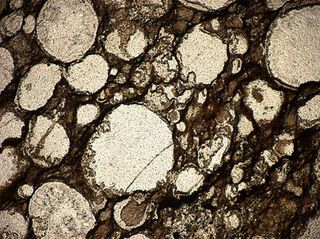 Pumice rocks like these 3.5-billion-year-old rocks from the Apex Chert, Australia, may have been cradles for Earth's first life.
(Image: © Oxford Uuniversity/Martin Brasier.)

Floating rafts of volcanic rock could have been cradles of life in the early days of Earth, some scientists suggest.

The circumstances under which life emerged sometime before 3.5 billion years ago remain largely mysterious. Commonly believed settings for the origin of life include deep-sea hydrothermal vents.

Now scientists in England and Australia suggest that rafts of pumice, which is essentially solidified lava froth, were instrumental as vessels for first life. This pale volcanic rock, which is rich in gas bubbles, is the only known rock type that naturally floats on the surface of the sea.

The researchers argue that pumice erupted from volcanoes and floating on the sea would offer a way to bring together the diverse ingredients needed for life to develop.

A raft of such rock would potentially be exposed to, "among other things, lightning associated with volcanic eruptions, oily hydrocarbons and metals produced by hydrothermal vents, and ultraviolet light from the sun" as it floated on the water, said researcher Martin Brasier, an astrobiologist at Oxford University. "All these conditions have the potential to host or even generate the kind of chemical processes that we think created the first living cells." [Image Gallery: Electric Earth]

This porous rock has the greatest ratio of surface area to volume of any type of rock, offering plenty of space for key life chemicals to glom onto; these would include metals, phosphates and organic compounds. Its many pores could have  essentially served as miniature caldrons of primordial soup, each acting as "an ideal 'floating laboratory' for the development of the earliest micro-organisms," Brasier said.

The pumice rafts eventually would have beached themselves along shorelines.

"We know that life was thriving between the pores of beach sand grains some 3,400 million years ago," said researcher David Wacey of the University of Western Australia in Crawley. "What we are saying here is that certain kinds of beach might have provided a cradle for life."

To test whether pumice rafts indeed could have served as habitats of the earliest organisms, scientists could conduct lab experiments, exposing such rocks to cycles of heat and ultraviolet radiation and seeing whether that generates the building blocks of life.

Future studies also could investigate the early fossil record for signs of these rocks.

What might such work "tell us about the search for life on other planets? It suggests that a place like Mars could contain fossils," Brasier told LiveScience. "There are lots of deposits very like those we have been working on in Australia — beach or river sandstones."

The scientists detailed their findings in the September issue of the journal Astrobiology.