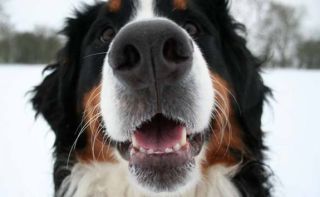 A specific part of your brain, your right amygdala, responds more to this animal face than that of another person, a study has found.
(Image: © Caroline Kjall/stock.xchng )

A part of your brain is hardwired to respond to animals, whether cute and fluffy or ugly and threatening, a new study has found.

A research team showed pictures of people, landmarks, animals or objects to epilepsy patients, who were already wired up so doctors could watch brain activity related to seizures. The researchers monitored the activity in the patients' amygdalae, two roughly almond-shaped structures in the brain associated with emotions, fear and the sense of smell.

"Our study shows that neurons in the human amygdala respond preferentially to pictures of animals, meaning that we saw the most amount of activity in cells when the patients looked at cats or snakes versus buildings or people," said Florian Mormann, lead study researcher and a former postdoctoral scholar at Caltech.

"This preference extends to cute as well as ugly or dangerous animals and appears to be independent of the emotional contents of the pictures. Remarkably, we find this response behavior only in the right and not in the left amygdala," Mormann said.

They found the activity in the right amygdala was not only greater, but neural responses were also faster for the animal pictures. The researchers then found the same response among people not suffering from epilepsy.

Past amygdala research has usually focused on human faces and fear, so it was a surprise to see that neurons in the right amygdala respond more to animals of all kinds than to human faces, according to Ralph Adolphus, a team member and professor at Caltech.

"I think this will stimulate more research and has the potential to help us better understand phobias of animals," Adolphus said. [Woman With No Fear Intrigues Scientists]

The lop-sided nature of the animal-induced response supports the idea that the right hemisphere of the brain became specialized in dealing with unexpected and biologically relevant stimuli or with changes to the environment, according to Mormann.

"In terms of brain evolution, the amygdala is a very old structure, and throughout our biological history, animals — which could represent either predators or prey — were a highly relevant class of stimuli," Mormann said.

The research appeared online Aug. 28 in the journal Nature Neuroscience.