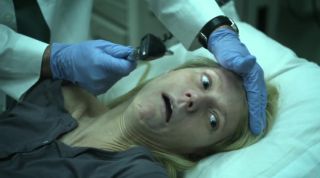 As "Contagion" hits the big screens this weekend, moviegoers may be left in suspense, while scientists and health officials only get a glimpse of what they've been dealing with for years: the struggle to combat not only diseases but the spread of myths veiled as facts from anti-vaccine advocates. The results can be deadly.

In the film, Kate Winslet plays an epidemiologist tracking a contagious disease as it spreads throughout the world. She and others at the Centers for Disease Control and Prevention must battle not only the virus but public misinformation from an anti-vaccine activist.

Jude Law appears as the conspiracy theorist blogger advocating a worthless homeopathic remedy instead of a proven vaccine to combat the disease, telling his growing (and fearful) audience that the government can't be trusted. (In fact, scientists know that if the product truly is homeopathic, it actually cannot work, since the product would have no active ingredient in it, having been diluted far beyond the point of efficacy.)

One reason why doubts and conspiracies emerge around vaccines is that their effectiveness cannot be proven on an individual basis. Even people who are effectively vaccinated against a disease can still get it: No vaccination is completely effective. You might catch a flu from a different virus strain than the one you were inoculated against. And many unvaccinated people do not get the disease because they are already immune to it or were never exposed to it.

In other words, one individual is not an accurate bellwether of the safety or efficacy of a vaccination. Instead the vaccinations are proven in government-run studies of large groups of people. [5 Dangerous Vaccine Myths]

Fear of vaccination is nothing new; it's been around for centuries. There was vehement resistance to the very first vaccine, created for smallpox in the late 1700s. When the public learned that the smallpox vaccine was created by taking pus from the wounds of infected cows and giving it to humans, they were disgusted by the idea; some even believed that the vaccination could turn children into cows! [Myths Fuel Dangerous Decisions to Not Vaccinate Children]

In England, vaccination deniers formed an Anti-Vaccination League in 1853, followed by the Anti-Compulsory Vaccination League in 1867. These groups claimed that the smallpox vaccine was ineffective and dangerous, and that it represented not only a conspiracy but an infringement on personal rights by the government and medical establishment.

Such fears over smallpox vaccination have been long since disproven — the vaccination was both safe and effective — but the distrust and fear-mongering continue to this day, both on the silver screen and in real life.

In "Contagion," Law's character is based on several real-life vaccination deniers (whom he declined to name for fear of promoting them), but there's no shortage of people who make a living feeding doubts about vaccination. Perhaps the most famous is Dr. Andrew Wakefield, the lead author of a small 1998 case report suggesting a link between vaccines and the onset of childhood autism. The British General Medical Council found he had acted unethically in his research, and his paper, which was championed by celebrities including model Jenny McCarthy, was retracted by its publisher, the Lancet. The British Medical Journal called his work "an elaborate fraud."

While the first vaccination deniers were undoubtedly sincere (if misinformed), some of the current crop of anti-vaccination advocates may be motivated more by money. According to the British Medical Journal, Wakefield hoped to earn over $40 million per year from selling his own "safer" vaccine products and diagnostic kits to the parents of autistic children. Wakefield denied that his work was driven by the desire for financial profit.

Then there's Kevin Trudeau. Unlike Wakefield, Trudeau has no medical training. He is a pitchman best known for appearing on infomercials selling his conspiracy-laden best-sellers, which include "Natural Cures 'They' Don't Want You to Know About." Trudeau, a convicted felon for larceny and credit card fraud, has made millions claiming to reveal important medical information kept secret by a conspiracy between the medical establishment and big drug companies. Vaccines are mostly worthless, he says, and he'll sell you a secret on how to stay healthy.

It's ironic that vaccination deniers love to cite Big Pharma profits as a reason why vaccinations continue but neglect to cite the billions in profit made by the alternative medicine and homeopathy industries (and their advocates).

Vaccine deniers are nothing new, and they march ahead regardless of the facts and evidence. They are correct about one thing: There are risks involved in vaccinations, as there are with any drug or medical intervention. The risks are not hidden but instead well-known and easily available from your doctor or online. The risks of side effects are far less dangerous than the risks of catching the disease.

Benjamin Radford is deputy editor of Skeptical Inquirer science magazine and author of "Scientific Paranormal Investigation: How to Solve Unexplained Mysteries." His website is www.BenjaminRadford.com.