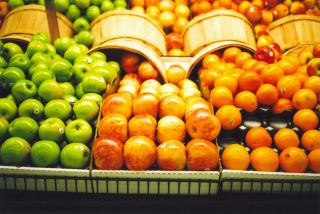 People show a significant preference toward choosing items located in the middle, according to the study.
(Image: © cherrycoke | sxc.hu)

Next time you're perusing the aisles of a grocery store, pay attention to how many products you pick up from the middle shelf. Turns out, people tend to favor items located in the middle of a row, a new study shows.

"People may not be aware of this preference, but it may influence choice in a wide range of day-to-day settings, such as the products people buy in shops or via online shopping, the responses they provide in surveys, and potentially the people they select for a range of tasks or functions," said study researcher Paul Rodway of the University of Chester in the United Kingdom.

The experiment results showed that participants displayed a significant trend toward choosing the picture in the middle when they were asked to pick a positive preference. However, the location of the pictures did not appear to influence selection among the participants asked to choose their least preferred picture.

Researchers performed a second experiment that followed the same model as the first except that the pictures were arranged vertically and all of the participants were only asked which picture they preferred best. The researchers noted that although it would be reasonable to predict that items at the top of a column would be viewed more positively than those located at the bottom, the centrally located items were once again rated as preferable.

A final test consisted of researchers asking participants to choose their preferences from among a display of actual pairs of socks instead of just pictures of items. Half of the subjects viewed the column of socks at head level and the other group looked at the column from thigh height. Once again, most of the participants chose the middle pair of socks.

However, the study noted that the pairs of socks in the lowest two locations on the display were chosen least often. This may suggest a relationship between the relative height of an item on display and consumer preference, according to the researchers.

The findings support the "center-stage effect," which suggests that middle preference is applicable to horizontally or vertically arranged non-identical items. Central placement may also influence how we perceive and choose not just items, but people as well.

"It's possible that this preference applies in a range of social contexts, including televised political debates where being in the middle may convey an advantage," Rodway said.

The study was recently published in the journal of Applied Cognitive Psychology.