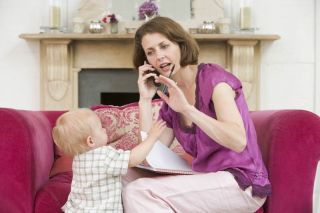 Higher stress levels reported by mothers during their child's first year of life were linked with DNA changes when the kids became teenagers.

Stressed-out parents make lasting impressions on their kids, according to a new study that finds the negative experience causes changes to a child's genes that are still present in their teenage years.

The finding reveals a mechanism by which childhood experiences impact a person's biology, the researchers said.

"This is very exciting, because we've shown that day-to-day stress in early childhood can predict changes in DNA that can be observed in adolescence," said study researcher Marilyn Essex, a professor of psychiatry at the University of Wisconsin's School of Medicine and Public Health. "It's further proof of the importance of those early years and the lasting effects of children's family environments during infancy and preschool."

The team focused on epigenetics, which is a process that affects the expression of genes without changing the underlying DNA sequence. Central to epigenomics is a process called methylation, in which a chemical group attaches to parts of an organism's DNA and affects whether or not a gene gets expressed in response to social and physical cues.

The researchers measured methylation patterns in cheek-cell DNA samples collected from more than 100 15-year-olds, comparing the results with data collected in 1990 and 1991 from the parents of these same children. The parents had been asked to provide information regarding their stress levels, including family-expressed anger, parenting stress, depression and financial stress.

"This seems to be the first demonstration, using carefully collected longitudinal data, that parental adversity during a child's first years leads to discernible changes in his or her 'epigenome,' measurable more than a decade later," study researcher Michael S. Kobor of the University of British Columbia said in a statement. "This literally provides a mechanism by which experiences 'get under the skin' to stay with us for a long time."

The researchers also found that mothers' stress levels had an effect on both boys and girls, but fathers' stress levels were more strongly associated with DNA methylation in daughters. These findings support previous research showing that the absence of fathers or their lack of participation in parenting is associated with an earlier onset of puberty and difficult temperamental traits in girls — but not in boys.

The study was published on Aug. 30 in the journal Child Development.