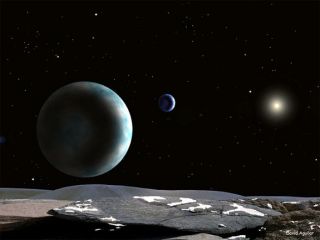 Artist's impression of Pluto and Charon as seen from one of Pluto's other moons.
(Image: © David Aguilar/Center for Astrophysics)

But things changed nearly five years ago today. On Aug. 24, 2006, the International Astronomical Union (IAU) struck Pluto from the list, demoting it to the newly created category of "dwarf planet." The move was spurred by the discovery of multiple large bodies orbiting even farther from the sun than distant Pluto — particularly an object called Eris, which appeared to be bigger than Pluto.

As a result, the IAU came up with a new definition of "planet": A body that circles the sun without being some other object's satellite, is large enough to be rounded by its own gravity (but not so big that it begins to undergo nuclear fusion, like a star) and has "cleared its neighborhood" of most other orbiting bodies. [Our Solar System: A Photo Tour of the Planets]

Since Pluto shares orbital space with lots of other objects out in the Kuiper Belt — the ring of icy bodies beyond Neptune — it didn't make the cut. So Pluto was newly classified as a dwarf planet, which tend to be smaller than "true" planets and fall short on the "clearing your neighborhood" criterion.

Pluto was discovered by American Clyde Tombaugh in 1930, as part of a search for the mythical "Planet X" that was thought to be perturbing the orbit of Uranus.

The dwarf planet was initially believed to be at least the size of Earth, but astronomers now know that it's about 1,455 miles (2,352 kilometers) across — less than 20 percent as big as our planet. And Pluto is just 0.2 percent as massive as Earth.

Pluto has an extremely elliptical orbit that's not in the same plane as the eight official planets' orbits. On average, the dwarf planet cruises around the sun at a distance of 3.65 billion miles (5.87 billion km), taking 248 years to complete one circuit. [Infographic: Pluto - A Dwarf Planet Oddity]

Because it's so far from the sun, Pluto is one of the coldest places in the solar system, with surface temperatures hovering around minus 375 degrees Fahrenheit (minus 225 degrees Celsius).

Pluto has four known moons: Charon, Nix, Hydra and a newly discovered tiny satellite currently called P4 (its final name may end up being Cerberus). While Nix, Hydra and P4 are relatively small, Charon is about half as big as Pluto. Because of Charon's size, some astronomers regard Pluto and Charon as a double dwarf planet, or binary system.

While Pluto is tough to study because it's so far away, scientists think the dwarf planet is about 70 percent rock and 30 percent ice. Its surface is covered predominantly with nitrogen ice. The dwarf planet has a thin atmosphere — composed mainly of nitrogen, methane and carbon monoxide— that extends about 1,860 (3,000 km) into space.

Pluto will start coming into clearer focus in a few years' time. NASA's New Horizons probe is due to make a close flyby of the dwarf planet in July 2015, marking the first time a spacecraft has ever visited the frigid, faraway world.

Caltech astronomer Mike Brown led the team that discovered Eris in 2005. The find spurred the IAU to strip Pluto of its planethood and create the "dwarf planet" category a year later.

That decision remains controversial to this day, making Eris' name quite fitting: Eris is the Greek goddess of discord and strife, who stirred up jealousy and envy among the goddesses, leading to the Trojan War. Eris' one known moon, Dysnomia, is named after the goddess' daughter, who served as the spirit of lawlessness.

Eris is virtually the same size as Pluto, but it's about 25 percent more massive, suggesting that Eris contains considerably more rock (and less ice) than its Kuiper Belt neighbor. However, the surfaces of the two dwarf planets appear to be similar, composed primarily of nitrogen ice.

Like Pluto, Eris has a highly elliptical orbit. But Eris is even more far-flung, orbiting the sun at an average distance of about 6.3 billion miles (10.1 billion km). It takes Eris 557 years to complete one lap around the sun.

Haumea, a Kuiper Belt denizen orbiting slightly beyond Pluto, was discovered by Brown and his team in late 2004. It's one of the weirdest objects in the solar system.

Haumea measures about 1,200 miles (1,931 km) across, making it nearly as wide as Pluto. But Haumea is just one-third as massive as Pluto, partly because it's not spherical. Rather, Haumea is shaped like a giant American football.

The dwarf planet also completes one full rotation in less than four hours, making it one of the fastest-spinning bodies in the solar system. This super-charged spin is responsible for Haumea's oblong shape, pushing the dwarf planet outward substantially at the equator.

Haumea, named after the Hawaiian goddess of childbirth, has two known moons, Hi'iaka and Namaka. The moons share their names with two of the goddess' daughters, who are deities in their own right.

Scientists recently discovered that 75 percent of Haumea's surface is covered with crystalline water ice, similar to the stuff found in your freezer. [Video: Dwarf Planet Veiled in Water-Ice]

An energy source is generally required to maintain such organized, structured ice. Astronomers theorize that energy may come from radioactive elements inside Haumea, as well as heat generated by the tidal forces the dwarf planet and its moons exert on each other.

Haumea makes one complete lap around the sun every 283 years.

Astronomers aren't sure of Makemake's exact size, but the dwarf planet is thought to be about three-quarters as big as Pluto. It's therefore likely the third-largest dwarf planet, after Eris and Pluto.

Makemake orbits the sun from slightly farther away than Pluto, at an average distance of 4.26 billion miles (6.85 billion km), and completes an orbit every 310 years or so.

Makemake is the second-brightest Kuiper Belt object (after Pluto) and can be seen with a high-end amateur telescope, according to the IAU. Like Haumea, Makemake is named after a Polynesian deity — in this case, the creator of humanity and god of fertility in the pantheon of the Rapanui, the native people of Easter Island.

Like Pluto and Eris, Makemake appears to be a reddish color in the visible-light spectrum. Scientists think its surface is covered by a layer of frozen methane, and the distant world has no known moons.

Ceres: King of the asteroid belt

Ceres is the only dwarf planet not found in the freezing cold, faraway Kuiper Belt. Rather, it orbits in the main asteroid belt between Mars and Jupiter, completing one lap around the sun every 4.6 years.

Ceres is by far the largest object in the asteroid belt, containing about one-third of the belt's mass. However, at 590 miles (950 km) across, it is the smallest known dwarf planet. It is named after the Roman goddess of the harvest and motherly love.

Because it's so much closer to Earth than the other dwarf planets, Ceres was discovered far earlier. Italian astronomer Giuseppe Piazzi spotted it first, on Jan. 1, 1801. For the next half-century, many astronomers regarded Ceres as a true planet.

That changed when it became apparent that Ceres was just one of many bodies hurtling through space in the asteroid belt. [The Seven Strangest Asteroids]

These days, most astronomers regard Ceres as a protoplanet, saying it likely would have continued growing into a full-fledged rocky planet like Earth or Mars if Jupiter hadn't shaken up the asteroid belt long ago.

Ceres is thought to be a complex, differentiated body harboring quite a bit of water. Scientists think it has a rocky core surrounded by a water-ice mantle, and its rocky surface may also sport some water ice. Some researchers believe an ocean of liquid water may slosh about beneath Ceres' surface.

Scientists and the world will get a much better look at Ceres less than four years from now. In February 2015, NASA's Dawn spacecraft — which is currently orbiting Vesta, the asteroid belt's second-largest resident — will arrive at Ceres to undertake a detailed study of the dwarf planet.