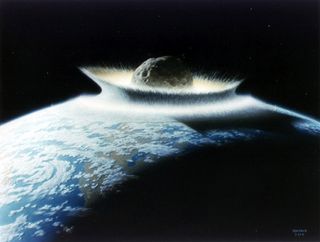 Artist's concept of a catastrophic asteroid impact with the early Earth. An impact with a 500 kilometer (310 mile) diameter asteroid would effectively sterilize the planet. The Earth may have experienced such gigantic impacts in its youth, but fortunately today there are no projectiles this large to threaten our planet.
(Image: © Don Davis/NASA)

For any single human being, there are bigger things to worry about than death by space rock. For the long-term survival of humankind, on the other hand, asteroids pose a real danger.

A 6-mile-wide asteroid that struck off the coast of present-day Mexico 65 million years ago induced ecological changes that wiped out the dinosaurs. Inevitably, an Earth-shaking chunk of space debris will strike again.

However, so many earthly worries exist that a cosmic one which, at any given moment, is infinitesimally small doesn't garner much attention — or government funding. Several scientists who study asteroid hazards agree: Humankind probably won't start readying its planetary defenses until we know the danger is real. We'll need evidence that a large asteroid is actually headed here. [When Space Attacks: 6 Craziest Meteor Impacts on Earth]

Will it be too late by then?

It depends. "Human beings can solve any technical problems that are put in front of us," said Daniel Durda, senior planetary scientist at the Southwest Research Institute in Boulder, Colo., and an expert on asteroid collisions. "It's the social and political issues that we struggle with." Rusty Schweickart, former NASA astronaut and founding member of the B612 Foundation, a nonprofit organization dedicated to protecting the Earth from asteroid strikes, concurred: "The geopolitical realities are daunting. The technical issues are easy by comparison."

Though we know very little about the composition of asteroids — necessary information for determining their masses, and knowing how to knock them off course — we do know where most of the large, nearby rocks actually are. NASA's Spaceguard Survey tracks the paths of all near-Earth asteroids (NEAs) in Earth's neighborhood that are larger than 1 kilometer (0.6 miles) in diameter. [The 7 Strangest Asteroids In The Solar System]

Knowing an asteroid's location is step one in determining if it's on a crash course for Earth, and fortunately, none of the big ones pose a threat at this time. If one of these known asteroids were found to have a greater than 1 percent chance of striking Earth, astronomers would figure it out at least a decade beforehand.

"A large impact of something 1 km across — that's a bad enough scenario that it would motivate people to take this seriously," Durda said. According to Clark Chapman, another senior scientist at the Southwest Research Institute, the international community would probably band together and plan a mission to divert the path of the asteroid. "This would probably require matching its orbit with a series of spacecraft equipped with bombs," Chapman said. Getting the deflection mission off the ground would cost on the order of $10 billion.

Though we don't have all the technology worked out yet, we do know how to build nuclear devices, and we have already successfully sent spacecraft to and from asteroids. "A decade out, given the technology it would take to do a deflection, I think we could respond in time," Durda told Life's Little Mysteries, a sister site to SPACE.com.

David Morrison, interim director of the NASA Lunar Science Institute and an expert on impact hazards, thinks we might need more time. He believes it would take two missions to deflect an asteroid. The first would rendezvous with the target asteroid and figure out what it's made of, the second, which would be specially tailored to the asteroid based on the first mission, to knock it off course. "One decade would be the minimum, but that would mean sending the deflection mission before we had characterized the target, which would be a bit risky. Twenty years is more realistic as a minimum," Morrison wrote in an email.

Schweickart says 15 years of warning of a coming impact would be a safe bet. Along with the time it takes to assemble a launch vehicle, launch, fly to and rendezvous with an asteroid, you also need "time enough for the deflection itself to accumulate enough change in the [asteroid] orbit for it to miss the Earth impact. Post deflection will require anywhere from say 3 to 10 years for the orbit change."

There are dangers involved with asteroids under the 1-kilometer threshold, however.

"Anything more than 300 to 400 meters (983-1,312 feet) in diameter can cause continental-scale damage," said Stephen Wolters, a research fellow at Caltech who studies near-Earth asteroids at NASA's Jet Propulsion Laboratory.

NASA has begun locating and tracking smaller asteroids, but there are thousands still at large. If one of these were on course to strike Earth, sky surveys would give us no more than a month of warning. In that case, said Morrison, deflection is probably not an option. Instead, "you respond more like the way we handle hurricane warnings," evacuating people from the area most likely to be struck.

Eventually we will track all asteroids larger than about 200 meters (656 feet) wide. The day scientists realize that one of these mid-size rocks has a chance of hitting us, and that we have enough time to do something about it, serious political strife will likely ensue, the experts say. [Will Asteroid Apophis Hit Earth in 2036? NASA Rejects Russian Report]

"If we had a decade of warning on a smaller-scale asteroid, 200 meters across, I think that's down in the area where we would be much more prone to arguing about possibilities and we wouldn't actually respond to it," Durda said.

Such an asteroid collision probably wouldn't cause a global catastrophe, just a national or continental one, he explained. This means that perhaps not every country would care to pitch in to deflect it, and others might be opposed to any action if it puts them at greater risk.

"The big challenge will be the international implications of where it will occur, what the range is — usually orbital uncertainties mean there's a track across the Earth where it's most likely to hit," he said. "Then, if you decide to deflect the asteroid, where does that track move across the Earth's surface before moving off the surface? Now you're taking an act of God and turning it into an act of litigation, where you've moved the impact point potentially into countries that had been safe."

He continued, "It's these very issues that will lead to all kinds of discussion and argument and inherent delay in taking any physical action."

Given orbital uncertainties, another issue is how probable an impact must be before we decide to take action. "The world economies cannot afford to protect against all low-probability hazards," Chapman said. A 1-in-1,000 chance of a collision, for example, will probably be ignored, and according to Schweickart, they already are. "There are already some near-Earth objects with impact probabilities greater than 1-in-1000 and no one is the least excited," he wrote in an email. A 130-meter-wide NEA called 2009FD, for example, has a 1-in-435 chance of impacting Earth in the year 2185.

"For [the case] of a 500-meter-wide near-Earth asteroid, at a probability of more than 1 percent, I think we would take the threat very seriously," Morrison wrote. "Below that I don't know."[The Greatest Mysteries of the Asteroid Belt]

Out of left field

There's one form of cosmic debris that no amount of international cooperation can do much about.

"There's always a possibility of a long-period comet coming from nowhere and giving us almost no warning," Wolters said. Not only do such bodies come from the outer reaches of the solar system, where we can't see them, "these comets can come from high inclination orbits where we're not looking for things. You might only have a few months notice."

Fortunately, experts estimate that long-period comets comprise only about 1 percent of all the space rocks that pass by Earth. "The good news is that they're only a tiny fraction of the overall hazard," Durda said.