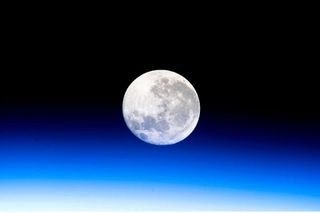 A full moon is visible in this view above Earth's horizon and airglow, photographed by Expedition 10 Commander Leroy Chiao on the International Space Station.
(Image: © Leroy Chiao | ISS | NASA)

Sky-watchers this month may be getting two full moons for the price of one ­— in a manner of speaking.

No, there aren't two bright orbs rising in the sky on Aug. 13, when the full moon will look its roundest. But a recent study in the journal Nature suggests that Earth might once have had two moons. Early in the history of the solar system, the second, smaller moon may have crashed into the first, becoming a permanent part of the moon we know and love today.

According to the research, we can't see the remains of the second moon from Earth, because it crashed into the far side of the moon, which always faces away from us Earthlings. We get the original view, pockmarked with craters. [Amazing Photos of the Full Moon]

That view will be at its most brilliant on Saturday, when August's full moon rises. This month's moon is known as the "Full Sturgeon Moon," a name given to it by Native American tribes who found that fishing was particularly good this time of year. August's moon has also been dubbed the "Green Corn Moon" and the "Grain Moon."

The moon will be directly opposite Earth from the sun at 18:57 Greenwich Mean Time on August 13, which is 2:57 pm U.S. Eastern Daylight Time. That's daytime for U.S. sky-watchers, but don't worry, the moon will look just as full to the naked eye by the time night falls.

The full moon may outshine this year's Perseid Meter Shower, which occurs when Earth passes through the debris trail of the Swift-Tuttle comet. Bits of space rock sucked in by Earth's gravity burn up in the atmosphere, putting on a light show. [Fallen Stars: A Gallery of Famous Meteorites]

The Perseids hit their peak on Aug. 12 and 13 this year, just as the moon is at its brightest. That leaves little opportunity for viewing this year's shower at its peak.