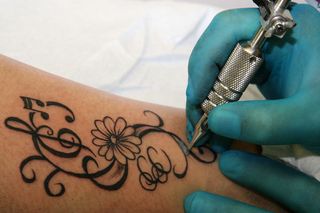 A rare but difficult-to-treat bacterial infection that usually strikes people with impaired immune systems is showing up for the first time in healthy individuals getting tattoos, the Centers of Disease Control and Prevention (CDC) reported today.

Two cases of skin infections caused by this bacterium, called Mycobacterium haemophilum, have occurred in individuals receiving tattoos in the Seattle area, the CDC said.

These bacteria are in the same family as those that cause tuberculosis and leprosy. Symptoms of the infection include small bumps at the site of infection, in addition to redness, pain, swelling and discharge, the researchers said.

The infection is not responsive to traditional antibiotic treatments, and even with the right drugs, can take months to heal.

Because of the rarity of the infections, tattoo aficionados shouldn't be too worried, the researchers say.

But the researchers want to increase awareness of these infections so doctors know to look for them, said study researcher Meagan Kay, a CDC Epidemic Intelligence Service Officer with the public health department in Seattle and King County.

"Clinicians should consider this bacterium as a potential cause of skin infections in persons who have recently received a tattoo," Kay said.

Kay and colleagues were asked to investigate a case of a 44-year-old man who developed a rash, then small bumps on his arm after getting a tattoo there in August 2009. The lesions remained for weeks after treatment with several antibiotics.

It wasn't until months later that researchers figured out the man was infected with Mycobacterium haemophilum. Doctors then treated him with three different antibiotics simultaneously, but the infection still took about six months to heal.

A second case was also suspected, but not confirmed, at the same tattoo parlor. That patient had similar symptoms to the 44-year-old man. The tattoo parlor was investigated, and was found to meet Washington State's safety and sanitation standards.

Tap water was used to dilute tattoo ink, and may have been the source of the bacteria, the CDC said. While using tap water is not against standards, the researchers recommended tattoo artists instead use distilled or sterile water at all times.

It's not clear why these two people developed Mycobacterium haemophilum infections even though they had healthy immune systems, but it may be because tattooing breaks the skin, which is normally a barrier to infection, Kay said.

To avoid tattoo infections, consumers should make sure the tattoo parlor they go to has properly trained artists, is clean and uses sterile equipment, Kay said. People who believe their tattoo to be infected should consult with their doctor, she said.

The report is published in the September issue of the CDC journal Emerging Infectious Diseases.

Pass it on: Doctors should consider Mycobacterium haemophilum as a cause of skin infections in people who've recently received a tattoo.